Wednesday, February 8th, 2023
THE LATEST
Home Giants If You Were Daniel Jones, What Would You Do?

As Giants’ Head Coach, Brian Daboll, stated Saturday night, it was a “crash landing” finish to a surprisingly good season. Now the Giants turn their attention to a long list of “to-do(s)” as the offseason brings on the front office season.  First order of business…Daniel Jones.

Let’s remember, Daniel Jones was NOT offered a fifth year option by the Giants in 2022.  This immediately put him on the hot seat to prove his worth to a new management and coaching regime.  And Daniel did just that.  He improved in nearly every quarterback measurement this season.  He was a true leader of a young team and led the Giants to a 10-7-1 record including one playoff win.  But Saturday didn’t go so well.

Immediately after the Giants lost to the Eagles 38-7, Daniel Jones was pretty non-committal on his desire to remain a NY Giant.  “I mean, we’ll cross that bridge when we get there,” Jones said, when asked if his offseason goal was to remain the Giants’ QB. “I’ve really enjoyed playing here. I appreciate all those guys in the locker room. It’s a special group of guys. And I really enjoyed being a part of it. We’ll figure out where that goes, but I have nothing but love and respect for this organization and the guys in the locker room.”

Brian Daboll certainly didn’t add any assurance after the game.  “Yeah, I — all these conversations, we’re gonna have those,” Daboll told reporters. “We’ve got a long offseason, and there’s a time and a place to have those conversations. Tonight’s not it.”  And then, “Eh, he competed,” Daboll said. “Look, we all didn’t do a good enough job, that starts with me. Daniel’s a competitor. (But) they controlled the game the entire game.”

What a Difference 24 Hours Makes

Then Sunday, as the Giants players cleaned out their lockers, the media asked Daniel again about returning to the Giants.  This time, Daniel stated he’d love to return to the Giants, “I love this place…I really want to be here.”  Sunday was also the exit interview for each player with GM Joe Schoen and Head Coach Brian Daboll.  I’m guessing this is when Joe and Brian flat out told Daniel they want him back and want to build the offense around him.

And in today’s end of season press conference, the media wasted no time in getting to the bottom of the Daniel Jones dilemma.  Joe’s answer to the very first question: “We’d like Daniel to be here. Again, he said it yesterday – there’s a business side to it. We feel like Daniel played well this season. He’s done everything that we’ve asked him to do. Again, there’s a business side to it. We haven’t gone down that road yet. We still have to have our meetings with our staff late in the week, and we’ll devise an offseason plan. We haven’t had those meetings yet, but we would like to have Daniel Jones back.”

So, if you were Daniel Jones, what would you do?  First, do you want to come back to the Giants?  After all the pressure the team made you endure in 2022?  After setting him up for failure on plays in the preseason? Daniel has already said yes to that. 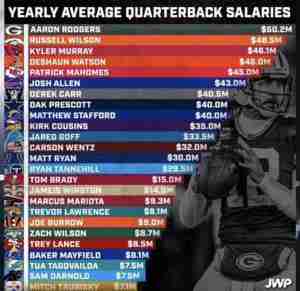 Second, do you take a “team-friendly” deal with a conservative (lower than you could’ve gotten) salary of $25-28M annual average value (AAV) over a 3-4 year deal?  Keep in mind, Daniel defeated QBs this season with salaries well above that AAV: Aaron Rodgers, Derek Carr, Kirk Cousins, and Ryan Tannehill. Is Daniel Jones going to take the “Tom Brady” approach and give the Giants an even bigger break in salary so they can keep other players to field a competitive team?

Or do you go for the top dollar deal and insist on Dak Prescott and Matthew Stafford money approaching $40M AAV?

One thing is for sure, Daniel Jones will get paid this coming season.  I say he stays a Giant and gets a pretty sweet deal in the $35M AAV range.

Super Bowl 57 is now less than a week away.  The Philadelphia Eagles are taking on the Kan…