The NHL reached its mid-season point and with the annual All-Star game around the corner and the trade deadline looming just beyond the horizon, it’s time for the Rangers to start thinking about potential 2023 draft rankings.  There is a plethora of top-tier talent avaiable this year and the excitement of the recent World Junior Championships gave us a glimpse of just how good some of these draft prospects are.

The obvious elephant in the room in terms of the upcoming NHL draft is none other than Connor Bedard.  Yes, he’s being compared to another Connor (McDavid) and the comparison is probably well-deserved. The young Bedard is a WHL sensation with the Regina Pats and recent statistics show him scoring 36 goals and 42 assists in just 31 games so far this season.  Bedard’s heroics in the WJC also shined brightly on his star with nine goals and 14 more assists in the seven game tournament (won by Bedard and his fellow Canadians.)   Let’s be real with Bedard’s chances of coming to the Rangers –  this young, highly talented player will make some other team very happy during the first round of the NHL draft but he’s not heading to join the Blueshirts anytime soon.

Leo Carlsson: Carlsson is another top NHL prospect and the highly-touted Swedish forward looks to move up the draft rankings by this summer as well.  Carlsson is a big, 6’3″, 194 pounder and plays for Orebro in Sweden where he’s contributed four goals and 11 assists in 27 games while adding three goals and three assists during the WJC tournament.  Carlsson is a solid European prospect and should find himself drafted high into the first round.

Adam Fantilli: People like to claim that being number two in anything is the first loser but that’s not the case with Adam Fantilli.  Sitting ranked as the second-best draft prospect behind Connor Bedard certainly leaves little doubt among NHL franchises that Fantilli is one of the best in the world right now.  Fantilli joined fellow Canadian Connor Bedard in winning the recent WJC where he scord two goals and had three assists in the tournament.  Fantilli has found his place as a freshman in the NCAA as a Michigan Wolverine where he’s contributed 11 goals and 18 assists in just 18 games so far this season.  Fantilli is versatile where he can play and the 6’2′, 187 pound college freshman has increased his draft stock considerably.  With the fight over Bedard going to the bottom teams after this season, don’t be surprised if there’s a scramble to draft Adam Fantilli and his selection may become one of the more dramatic story lines this summer during the NHL off-season. 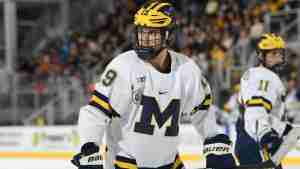 Matvei MIchkov: MIchkov is more of a wild-card draft prospect this year due to Russia’s ban from international competition.  Michkov is a 5’10”, 148 pound right winger and is considered to be Russia’s top prospect right now.  However, with limited recent international exposure and the complications due to the war between Russia and Ukraine, Michkov may be a tough prospect to sign and NHL teams may pass on him despite his talent.  Michkov signed with SKA Saint Petersburg through the 2025-26 season and just getting him out of Russia may take lots of international negotiations between the KHL and the NHL.  If anything else, Michkov will be a stay tuned type of prospect for the near future.