There’s nothing left to say.  the 2022-23 NFL regular season is officially over and the New York Jets yet again will be watching the postseason from their living rooms.  A season that started with a lot of promise and actually got the Jets some attention during the mid-season ended yesterday pretty much the same way every other season has ended since 2010 – unceremoniously and without a shot at the playoffs.

The playoff drought will continue for the Jets and with yesterday’s loss to the Miami Dolphins 11-6 (yes a baseball score since nobody could score a single touchdown) the Green and White get to sit home and stew over another season of shoulda, coulda, woulda.  No excuses are necessary and none are acceptable at this point.  The New York Jets simply shot themselves in the foot one too many times this season and it shows.  This team was once 7-4 and looking to make a playoff run; an 0-6 record to finish the season showed us the only run this team was going to make was how fast they could get to the offseason.

Were there any successes this season?

The answer to that is of course there were plenty of bright spots for the Jets this past season.  The Jets discovered the term defense they are building the nucleus of a stellar defensive unit for the future.  With top talent from players like Sauce Gardner, C.J. Mosley and Quinnen Williams, the Jets have the potential to develop one of those scary types of defenses that should help propel them to the next level.  Offensively, the Jets have some key players like Garrett Wilson who set multiple rookie offensive records this season.  Losing Breece Hall to an ACL injury greatly hampered the Jets’ running game mid-way into the season and hopefully he can come back healthy and continue to provide the Jets with a desperately needed ground attack.

The true shining stars week in and week out this seasonf for the Jets was seen in special teams.  For the last three weeks, kicker Greg Zuerlein scored the only points for the Jets with multiple field goals.  Punter Braden Mann was stellar at pinning back punt return units and Braxton Berrios has developed into the next level as a kickoff and punt returner.  However, you can’t build your team on special teams and the Jets need to figure out to put points on the board for next season or 2023-23 will be another repeat season.

The Jets have some major problems within the organization.

Saying that the Jets have some major problems is probably a gross understatements.  From GM Joe Douglas on down to head coach Robert Saleh, they need to figure things out and quickly.  For Saleh, not only is he on the proverbial hot seat but his offensive coordinator Mike LaFleur should probably box up his personal belongings in his office and just keep them in a box for the time being.  Going the last three games of the season without scoring a single TD never bodes well for an offensive coordinator. 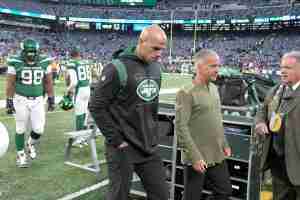 Of course, the biggest question of all for the Jets is their quarterback situation.  Using no less than four QB’s this season including Joe Flacco, Zach Wilson, Mike White and even Chris Streveler, the Green and White have shown the football world that they have little clue what they’re doing in terms of their offensive overall scheme.  It’s probably a safe bet to say that the Zach Wilson experiment has failed miserably and it’s time for the Jets to move on to another QB but which one?  Do the Jets give White or Streveler a chance to compete for the starting position, given that Mike White’s contract will be ending soon and he could look for a better opportunity with another team?  Or do the Jets look at the free agent market during the offseason?  The only correct answer right now is that the Jets have to do something and do it quickly regarding their QB situation.

Hey, it’s a brand new year and time to celebrate the New York Jets making it to the …