Thursday, February 9th, 2023
THE LATEST
Home Rangers Rangers looking to break out in 2023

Ah, yes, we’ve made it past the holiday season and now’s the time to start enjoying  a new year of sports that hopefully brings some sense of hope and joy for fans.  The Giants are heading to the playoffs, the Jets are, well, doing what the Jets have been doing for quite some time and all three local NHL teams – Rangers, Devils and Islanders are all winning and looking at the Stanley Cup playoffs as I’m writing this article.

The New York Rangers now seem to be firing on all cylinders-finally.  With an overall 22-12-6 record worth 50 points, the Blueshirts have moved into third place in the Metro Division and if recent success is an indicator, they may stay in that front three until the season is over.  Of course, many things can and will happen over the course of the next month but if  the Christmas holiday season serves as the new NHL seasonal benchmark, the Rangers right now are in good shape.

Blueshirt fans have known that Igor Shesterkin is a special kind of player and last season’s Vezina Trophy winner just garnered another feather in his goalie mask-getting the nod to this year’s All-Star game in Miami. While this honor should come to no surprise for the Blueshirt faithful, Shesterkin’s selection means that the NHL recognizes his value and being in the top categories for wins, goals-against average and save percentage will help both Shesterkin and the Rangers as they continue their upward move in the Metro Division and the whole Eastern Conference.

Whether it’s beating a top-shelf team like the Carolina Hurricanes or the tough-luck Montreal Canadiens, the Rangers have taken a page out of sports history and are playing with the “Just Win Baby” mantra made famous by the old Los Angeles Raiders (that should date this motto just a bit.)  The Rangers are 7-2-1 in their last ten games and with a three-game winning streak on the line, the Blueshirts are doing that – just win baby.  The Rangers have found a way to figure out their lines and the recent contract extension of Jimmy Vesey shows that this organization may have found a way to just keep on winning.  Yes, there’s plenty of hockey still to play and lots of things can and will happen.  However, Blueshirt fans should finally allow themselves to start felling good about this team.  It doesn’t have to be pretty; it doesn’t have to be ESPN-worthy highlight clips but Just Win Baby. 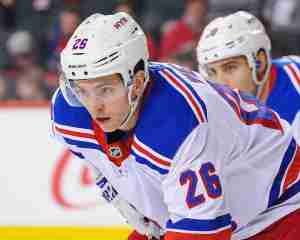