Thursday, February 9th, 2023
THE LATEST
Home Jets The Jets must be on the Naughty List

Earlier this season, things were really looking up for the New York Jets and even the various NFL pre- and post-game shows were singing praises about the Green and White.  Well, that’s come to a crashing halt and in case you didn’t hear about it over the hustle and bustle of last-minute holiday preparation, the Jets season probably burst in flames last Thursday night.

The first and obvious question is who’s to blame?  Fans and sports pundits alike love to find a scapegoat and put the blame squarely on a players’ shoulders for a loss.  Well, this isn’t pee-wee football but the NFL and when you’re a multi-million dollar player, you are going to get blamed for losses as well as reap praises for big wins.  Santa Claus apparently had the Jets on his “Naughty List” because all they got was a big lump of coal for this game in the form of a lousy 19-3 loss to the Jacksonville Jaguars.

There is no offense to the Jags with this win because they earned it and are on a three-game winning streak.  Guess which team is currently in first place in their division and possibly heading to the playoffs and which team is in last place in their division and holding on to a playoff spot by one fingernail?  The Jacksonville Jaguars under second year QB Trevor Lawrence are finally seeing the potential in their 2021 first draft pick and are starting to build respectability and a shot at the postseason while the Jets are continually losing on their 2021 second draft pick with Zach Wilson.

For the second time this season, Wilson was benched and why not?  With a dismal nine completions out of 18 attempts for a grand total of 92 yards and one field goal, Wilson showed once again he’s out of his depth and let;s be brutally honest here  -Wilson has been a big disappointment and despite the “instant coffee” references, Wilson isn’t brewing up anything palatable while his fellow draftmate Trevor Lawrence is coming into his one in the NFL. 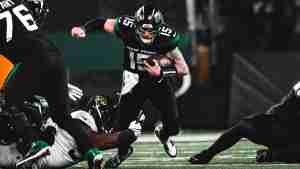 By the third quarter of this game, the Jets put in backup QB (straight from the practice squad) Chris Sreveler who then completed ten of 15 passes for 90 yards and ran for another 54 yards and tried to create some sort of spark in the moribund Jets’ offense.  To be fair to this team, there is so much talent on the roster and for the most part, this organization is heading in the right direction.  However, until the Jets realize that Zach Wilson isn’t the guy they’re looking for and start looking hard and players like MIke White and Chris Streveler to help lead this team, the Green and White will continually be involved in the playoffs from their home living rooms.