Thursday, February 9th, 2023
THE LATEST
Home Yankees Is Max Kepler The Unexpected Move Of The Offseason For The Yankees?

The Yankees got their biggest move of the offseason done by re-signing Aaron Judge to a 9-year $360 million contract, and now it’s about improving other areas of the team.

Brian Cashman mentioned that he was targeting right field, left field and starting pitching at the beginning of the offseason. Right field is obviously taken care of. Unless you have been living under a rock, you know that the Yankees have been heavily involved in the Carlos Rodon sweepstakes. They are viewed as the favorites to land Rodon, who has had two really good seasons back-to-back. It is a waiting game in regards to that signing.

The left field spot is much more wide open. Cashman has said publicly that he would like to bring back Andrew Benintendi, who is coming off of wrist surgery, so there is an inherent risk there. The team has also been connected to Michael Conforto, who sat out all of last year due to injury. The third free agent they were most-connected to was Japanese outfielder Masataka Yoshida, who signed with the Red Sox and has concerns on the defensive side. With how tough it is to play left field at Yankee Stadium, it never made much sense for the Yankees to invest significant money in Yoshida.

The Yankees and Diamondbacks have been connected in trade talks, particularly for outfielders like Corbin Carroll, Daulton Varsho and Alek Thomas. All of the potential trade candidates from the Diamondbacks are young and would cost a decent amount of prospect capital.

While Kepler’s production has declined over the last couple of years, his advanced metrics show reason for optimism, especially if he were playing in Yankee Stadium. According to baseball savant, Kepler ranked right around league average in barrel rate, average exit velocity and hard-hit rate in 2022, but was well above-average in expected batting average, strikeout rate, chase rate and walk rate. 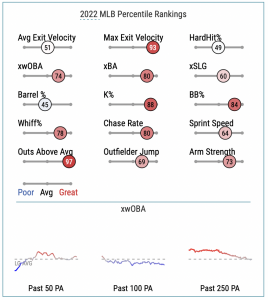 You will also see that Kepler grades out very well in defensive stats like outs above average, outfielder jump and arm strength. He also had nine defensive runs saved in the outfield in 2022. Even if Kepler is just about league-average with his bat, he provides value because of his strength on defense.

As mentioned above, Kepler would benefit from playing at Yankee Stadium. It is easy to see by taking a quick look at his spray chart. 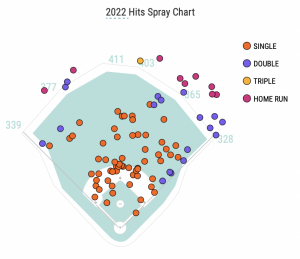 Many of those doubles to right would fly over the fence at Yankee Stadium. Kepler hit nine home runs in 2022, and playing in the Bronx would have added 14 home runs to his total.

While Kepler isn’t a superstar by any means, and he probably won’t produce like he did back in 2019 on offense, he could still be a solid addition for the Yankees in 2023.

The 2022 MLB Winter Meetings are underway, and it seems like Aaron Judge’s decision …