Wednesday, February 8th, 2023
THE LATEST
Home Jets Mike White: Down but not Out

Football is a game that’s definitely not for the faint of heart.  Just ask Jets’ quarterback Mike White that question after the physical shellacking he took courtesy of the Buffalo Bills and you will quickly realize that football isn’t easy.  Neverthless, the Jets dropped another critical game against their divisional rivals the Buffalo Bills.

Did anything go right against the Bills?

Truth be told, the Jets’ defense still played lights out and for the most part contained Josh Allen and his high-powered offense on a cold, wet afternoon in Orchard Park, NY.  Jets’ QB Mike White proved his physical and mental toughness by coming back to play after not one but two massive hits – including a hit that eventually sent him to the hospital after the game as a precaution to check on a damaged ribcage.  White is still scheduled to start this week against the Detroit Lions

Injuries are again mounting up and hitting the Green and White hard-typical for this time of the season not only for the Jets but other NFL teams as well.  The Jets lost WR Corey Davis and DL Quinnen Williams for this game and their absence was felt.  White tried to make this a competitive game by completing 27 out of 44 passes for 268 yards and one single TD.  Despite the low numbers, the Jets’ D held Josh Allen to even less yardage as the Bills garnered only 232 total yards on offense.  Rookie WR Garrett Wilson broke the Jets’ rookie reception record which was set by Keyshawn Johnson back in 1996 and at least there was one bright spot on an otherwise bleak Sunday afternoon in western New York. 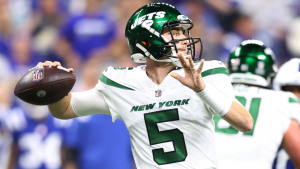 Sorry – it doesn’t get any easier the next few weeks.

I wish I could cheer up Jets fans and tell them that Santa Claus is going to be nice to the Green and White the next few weeks but it just isn’t in the cards.  Coming off two tough losses to the NFC North and AFC East divisional leaders, the Jets won’t get much of a break at home the next two weeks.  This week the Jets can look forward to a vastly-improved Detroit Lions’ squad at MetLife Stadium.

The  6-7 Lions are another turnaround story this season and have won four of their last five games including a knockout blow to the Minnesota Vikings this past Sunday.  The Jets will then face the 5-8 Jacksonville Jaguars at home the Thursday before Christmas.  While on paper the Jets have a decisive edge over the Jags, the Teal and Black are coming off a big win against their divisional rivals in the form of the Tennessee Titans with a big 36-22 win.  On top of that, both of these next opponents are still in the wild card hunt in and these games will have meaning this late in December.  All Jets fans can do right now is hope that their 7-6 record will improve to at least 9-8 with two wins in their last four games at a minimum.  Three wins to wind up the season should help wrap up a wild card spot but right now their are no guarantees.  Welcome to the NFL at Christmastime.