The 2022-23 NHL season is unofficially one quarter completed and the New York Rangers have had a roller coaster ride so far this year.  A multitude of both highs and lows resonate in the Rangers’ record right now with an 11-9-4 record and 26 points which puts them in an unenviable fifth place in the Metro Division.  Did we expect this to happen?  Probably not, given the Rangers’ success last year with an Eastern Conference finals appearance but as I mentioned, the season is only one-quarter over which means a lot of hockey is still in front of us.

Jaroslav Halak finally beats the elephant in the room.

Jaroslav Halak was brought in this season as a solid backup netminder for Igor Shesterkin and with his reputatation over the years of beating the Rangers with multiple other teams, why not bring in the guy who finds a way to beat you all the time?  The 37 year-old veteran Slovakian goalie was and still is a solid choice for an experienced, mature backup and his performance so far this season is symbolic of the bumps in the road that the entire Rangers’ organization has faced.

With his first victory as a Blueshirt against the Ottawa Senators, Halak chased the proverbial elephant out of the room with a solid 3-1 win and 34 saves in the process.  Mind you, it took seven hard and often disappointing games for Halak to earn his first “W” with the Rangers but a win is a win nevertheless. Halak’s struggles to help pull off victories when defending the pipes is indicative of the continuous struggles for consistency that this entire organization has faced so far this season.

Jarolslav Halak now has a 1-5-1 record but still has a decent 2.89 goals-against average and a .897 save percentage with 174 total saves to his credit.  The win against Ottawa will hopefully allow Halak to shake off any nagging doubts in his mind that he can continue to win and help this time get back on the right track towards the postseason. 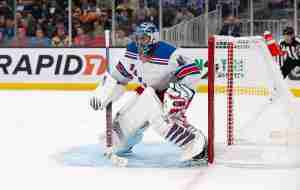 Halak’s woes are symbolic of the Rangers’ season so far.

While Jaroslav Halak finally found his winning “groove,” the same can’t be said about the Blueshirts who have a 5-4-1 record in the last ten games.  Inconsistency is the key phrase here when describing the Rangers’ on-ice efforts as of late.  In fact, the Rangers should just stay on the road because they have a combined 7-4-1 record away while a meager 4-5-3 record at Madison Square Garden.

With this inconsistency, the Rangers need to duplicate their away efforts in front of friendly home crowds.  Christmastime is a key indicator of whether or not an NHL team has a chance at the Stanley Cup playoffs and the Rangers need to get hot right now or they will be spending next spring watching the postseason from their living rooms.