The reminiscent chants of “Mike White, Mike White” could be heard again as the Jets took care of business over the Chicago Bears on Sunday 31-10.  Yes, Mike White is back and it’s hard to argue that benching Zach Wilson was a bad management decision by head coach Robert Saleh.  It looks like the Jets are set to take flight again with White under center.

Is Mike White really the quarterback for the Jets moving forward?

Many NFL franchises love drafting QB’s straight out of the college ranks and here lies the inherent problem: the NCAA isn’t the same as the professional ranks.  The Jets gambled highly on dfafting Zach Wilson in the first round last year and while the team’s move wasn’t out of the ordinary, Wilson has proved to be anything but a real game-changer for the Green and White.  In reality, most college QB’s struggle in their transition to the NFL and Wilson has had a bumpy road the past two seasons.

Enter Mike White.  White came in as a relief QB when Zach Wilson went down with an injury last season (an alarming trend for this young player as he started the season on the IR) and quickly won the hearts and minds of fans and teammates alike.  Chants of ” Mike White, Mike White’ permeated around and he seemed to be a possible answer to the Jets’ myriad of offensive woes last season until he too went down with an injury. 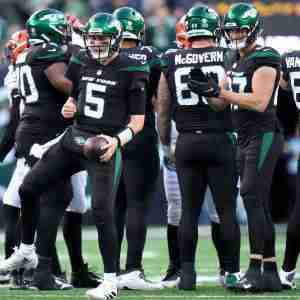 What did Mike White do yesterday against the Chicago Bears? Well, a solid 31-10 win doesn’t hurt in making a statement that he should be the starting QB moving forward.  Throwing 22 for 28 passes for 315 yards and three TD’s pretty much seals the deal on whether or not White should the starter heading into the final weeks of the season.  With a 149.3 QB rating, it would be hard to think of not using Mike White as the QB of the present.

White’s ability to make calm, quick decisions at the right time helped seal this victory for the Jets.  Using targets such as Garrett Wilson and Elijah Moore who combined together caught three TD passes, White was able to bring back a dynamic offense that could move the ball and not have to rely on the Jets’ defense to take care of things.

The next question will of course be should the Jets continue to rely on Mike White in the coming weeks?  Beating the Bears was great and the Green and White move to 7-4 which is the best record through 11 games since 2010 (and the last time the Jets made the postseason.)  In fact, according to NFL statistics going back to 1990, the Jets at 7-4 stand a 71.4% chance of making the playoffs this season.

Yes, the Jets face a harsh road trip with the Buffalo Bills and Minnesota Vikings in the coming weeks but also have the 4-7 Detroit Lions, 4-7 Jacksonville Jaguars and 6-5 Seattle Seahawks on their upcoming schedule as well.  No games at this point are “gimmes” but with Mike White staying healthy and continuing to provide leadership with the Jets’ offense, this team could possibly look to the postseason after a long absence