Saturday, November 26th, 2022
THE LATEST
Home Jets Jets lose 14th in a row to the Patriots 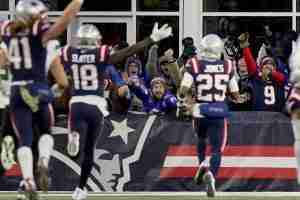 The title of this article says it all – the Jets can’t buy a win against the New England Patriots.  Mind you this one was close but so was the 22-17 loss a few weeks ago at MetLife Stadium.  The 10-3 loss to the Patriots didn’t have to end up this way.  Whatever is going on in Foxboro as the Patriots are in rebuilding mode post-Brady, they can still brag about beating the Jets 14 times in a row.

Excuses may start flying and you can blame the 40 mile per hour wind gusts or the early winter or any other litany of excuses but in the end the Green and White dropped a crucial game to their divisional rivals.  The world isnt’ coming to an end and the Jets still have a steady 6-4 winning record but with that loss they dropped immediately from second to the bottom of the AFC East.  That’s what happens when you lose two in a row to your divisional foes.

What really happened on Sunday?

The answer to that question is what really didn’t happen as the Jets dropped a critical divisional game and are now looking to find a way out of the AFC East cellar.  What a difference two weeks make.  Two weeks ago, the Jets were on a winning streak and looked like a brand new team.  This week, the Jets looked exactly like the Jets we’ve all come to know and expect.

Quarterback Zach Wilson and the Jets’ offense mustered a grand total of 103 yards of offense with exactly zero TD’s on Sunday.  Yes, the weather played a factor but that’s usually expected of outdoor stadiums in colder climates from late November until the end of the season.  Wilson looked like the old Zach Wilson we’ve come to expect as well by completing a paltry nine of 22 passes for exactly 77 yards.  Wilson was also sacked four times by the Pats’ defense.  Those numbers sound staggering until you realize that the Jets’s defense put the literal hurt on Patriots’ QB Mac Jones by sacking him six times.

However, the sacks amounted to little more than heavy QB hits as the Patriots did amass 297 total yards on offense but by the fourth quarter, all these two teams did was trade punts- six to be exact in the last quarter.  And this is where the story unfolds and unravels for the Jets.  With literally seconds to go and the game tied 3-3, Jets’ punter Braden Mann sent a 52 yard line-drive punt downfield into the waiting arms of rookie Marcus Jones who brought the punt back 84 yards and scored the game’s only TD.  The Patriots’ punt return TD was the first that the Jets have given up on the road since 2015 and of course the score became the deciding factor in the game.

Kick the ball out of bounds to prevent a return or aim it for the sidelines and let it bounce around or do anything but kick a line drive and allow a returner to take the ball to the house.  As an old football coach who did coach special teams, the last thing you want to do is put the ball in your opponent’s hands with seconds left because things can and will happen to you.  Tell your punter to aim the ball at somebody on the sidelines (something I’ve actually done before) or teach them how to kick a one-bouncer that hits in bounds and bounces out with no chance for a return.

Do anything but put the ball in your opponent’s hands with literal seconds left on the clock.  Well, the Jets get to stew over this one but not for long since they still have seven games to go and a chance for a winning season and possible playoff aspirations aren’t out of the question just yet.  This loss on Sunday did make the Green and White’s job harder though and maybe this loss will be a wake up call to get ready for the after-Thanksgiving season  -the real NFL season.