You’ve heard me say this multiple times before – the NHL season is a marathon race and not a sprint.  That being said, the New York Rangers are quickly falling off the pace of that marathon by casually walking while even the 80 year-old joggers are passing them by in this race.  Right now, the Rangers look anemic amidst an early season slump and they need to find a way to fix their problems-now.

With the disappointing 3-2 overtime loss to the Detroit Red Wings this past weekend, head coach Gerard Gallant has decided to continue with his line-changing experiment which started in earnest during the Red Wings loss.  With a six-game skid in the last ten games, the Blueshirts need to figure out things now or forget about the preseason goal of making the Stanley Cup finals.  With a current 6-4-3 record, the Rangers at this pace are looking at hopefully just making the playoffs out of the highly competitive Metro Division.

Why do the Rangers need to make line changes? 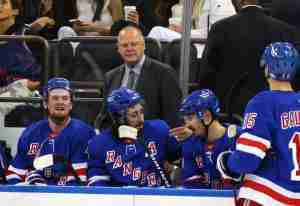 The answer to that question is found in losing six out of the last ten games.  When you start losing, coaches and players alike need to find out why you suddenly start losing.  For head coach Gerard Gallant, the answer may be found in simply changing up line shifts.  Gallant started experimenting with the Blueshirt lines during the loss to the Red Wings to see what the Rangers could do offensively.

One of the biggest and most poignant statements made by Gallant is the demotion of alternate captain Chris Kreider all the way down to the fourth line- the mop-up unit.  For Kreider, the seeming demotion may be warranted since his offensive production has fallen way off his career-high 2021-22 season pace this year.

Okay, Kreider has four goals and six assists for 10 points and he’s on track to possibly register up to 63 points this season; however, those numbers are down from a total of 77 points last year.  Gerard Gallant’s demotion of Kreider sends a message to the entire team that no player is immune to being called out for his job performance or lack thereof.  Chris Kreider is a team leader and as such needs to lead by example or move out of the way for players who can get the job done.

Gerard Gallant will also experiment with having Artemi Panarin and Mika Zibanejad on the first line together when the Rangers meet the Islanders.  The two have played very little together on the same line shift and the hope is that having Panarin, Zibanejad and Kaapo Kakko together they can stir up some offensive firepower as a unit.

The second line unit will feature JImmy Vesey (a long way from a PTO contract in the preseason) paired up with Vincent Trocheck and Alexis Lafreniere.  If these line combinations provide some signs of life for the Rangers, expect Gerard Gallant to keep them that way for the conceivable future.  For Chris Kreider, accepting his demotion and coming out playing for his team, regardless of his ice time, will be the key for him to make a move out of Gallant’s “dog house.”