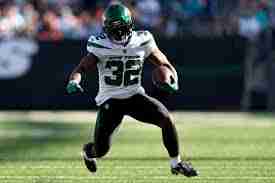 Maybe, just maybe it’s time to start thinking about the New York Jets having a winning season this year.  Saying that the Jets will win at least three more games might be premature but after Sunday’s win over the division-leading Buffalo Bills 20-17, the Jets are becoming more and more of a team on the rise and a true threat each week.  The bounce-back win with Buffalo is further proof that something positive is working in the Jets’ lockerroom right now.

Finding a way to get the job done.

Whatever head coach Robert Saleh and his staff are doing, just keep doing the same thing each week.  It’s really hard sometime to think of the Jets as a defensive team primarily but the Jets “D” is getting the job done.  Bills QB Josh Allen was essentially shut down on Sunday and the Green and White defense kept the Jets in this game.  CB Sauce Gardner was again on lock-down mode and each week he keeps building up his case for winning the Defensive Rookie of the Year Award.

Whatever you may think of GM Joe Douglas’ draft pick decisions in the past, selecting Sauce Gardner immediately is paying big-time dividends for the Jets.  Even more impressively for the Jets defense was the fact that at one point in the game the Bills were up 14-3 and Josh Allen was held from passing for at least one touchdown in this game for the first time this season.

QB Zach Wilson again showed that he’s learning the quarterback trade by being an effective game manager.  Wilson threw for a limited but respectable 18 completions in 25 attempts for 154 yards and one short TD pass to running back James Robinson-his first TD as a Jet.  With rookie sensation RB Breece Hall out for the season, Michael Carter again took over the ground duties and kept the ball moving on 12 carries for 76 yards with the Jets registering a total of 174 yards on the ground.

Jets special teams keep the Green and White in the game.

Week in and week out, kicker Greg Zuerlein keeps adding points on the board and his field goals were once again the deciding factor in Sunday’s win against the Bills.  The Jets’ special teams units even played a bit of trickery on a fourth and one fake punt direct snap to upback Ashtyn Davis who found enough yardage to keep one of the Jets’ drives going.

With a stout defense, an adequate managed offense who can find the end zone and increasingly automatic special teams units, the New York Jets have found a way to keep winning week after week.  The Jets are currently 6-3 and sitting in second place in the AFC East.  The Jets face a tough schedule down the road but a bye week this week should help rest sore muscles and tend to injuries before the tough divisional games roll in.