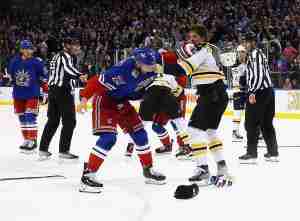 As the NHL season moves into it’s second month, the New York Rangers are looking for ways to keep any momentum going and capitalize on their current 6-4-2 record which puts them in an unenviable third place in the Metro Division right now.  Yes, it’s still early in the season but the Rangers recently had a three-game winning streak and failed to extend that streak against the red-hot Boston Bruins.  The loss to Boston proved to be a solid early season test and a possible warning for issues to come for the Blueshirts.

What are some of the Rangers’ problems right now?

While it’s not considered the end of the world to lose to the best team in the NHL right now (Boston extended their current record to 10-1 with the 5-2 win over the Rangers), bigger problems are starting to show their ugly heads in the Blueshirt organization.  Goalie Igor Shesterkin was one of the heroes last week in the 1-0 overtime win over the Philadelphia Flyers but the Rangers are now facing a serious shortage of defenemen to help Shesterkin control the pipes.

With the loss of defenseman Ryan Lindgren last week to an upper-body injury, the Rangers went down a man on their blueline shifts.  In addition, losing Braden Schneider to fighting after defending his ground left the Rangers periously thin with only four defensemen to call upon to skate agains the Bruins who have the best record in the NHL.

Are the Rangers facing issues with its special teams?

While the Blueshirt penatly kill units have recently improved their efficiency and actually killed 13 of 14 penalties in the last four out of five games, the Rangers’ power play units have actually slipped in recent games.  In fact, the main advantage against the Bruins fell flat as they went zero for two on opportunities with only one shot taken during the power play time.  As things stand currently, the Rangers are only converting their man-advantage at a rate of 20.9% of the time in games, while the penalty kill units have actually been far more productive and have an 82.9% kill rate.

It’s certainly not time to press any panic buttons regarding the Rangers quite yet.  Yes, there have been some setbacks and losing defensemen such as Lindgren only complicates the blueline shifts and makes Igor Shesterkin’s job that much more difficult. While the season is barely a month old, smaller issues right now have a tendency to fester and become bigger problems as the season progresses.