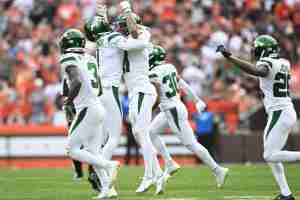 If you have been a Jets fan for longer thay say one week, then you just know to expect setbacks during the season.  Taking a couple steps back with this franchise is just par for the course and shouldn’t come as a surprise.  With the close 22-17 loss to the Jets’ nemesis New England Patriots, the feel-good four game winning streak is over and now the Jets look to find a new runway to take off from in the coming weeks to regain their composure and move forward with the 2022 NFL season.

Jets’ injuries are starting to mount and hurt the Green and White.

RB Breece Hall looked to be a surprise candidate for Offensive Rookie of the Year and helped the conversion of the Jets into a legitimate run team.  With Hall’s ACL injury last week, the Jets lost much of their momentum and had to turn to second-year RB Michael Carter to get things going on the ground.  Carter is a dual-threat back and ran for 26 yards on seven carries and caught four passes for 35 additional yards.  Carter put in respectable numbers but nothing compared to the rookie phenomenon Hall.  In addition, the Jets went running back shopping last week and brought in James Robinson from the Jacksonville Jaguars.  Robinson added 17 more ground yards on five carries and will hopefully provide more ground yards once he is fully integrated into the inner workings of the Jets offense.

Stalwart right tackle Alijah Vera-Tucker is also lost for the season after suffering a torn triceps injury in last week’s game.  Backup Cedric Ogbueki tried to fill Vera-Tucker’s shoes against the Patriots but lining up against NFL sack leader Matt Judon didn’t do much for the Jets offensive schemes as the Green and White gave up two sacks yesterday.

WR Corey Davis sat out yesterday to nurse an injured knee and rookie WR Garrett Wilson did add back something to the Jets passing game.  Wilson caught six passes for 115 yards and WR Denzel Mims joined the fray again with two more receptions for 76 yards including 47 yards after one of his catches which set up the Jets final touchdown.  QB Zach Wilson found another receiving target in TE Tyler Conklin who hauled in six more catches for 79 yards and both of the Jets’ touchdowns.

Are things looking bad for the Jets right now?

The NFL season is a grind and as teams approach the mid-way point of the 2022 campaign, every team starts suffering significant injuries.  One of the main mottoes heard every week in football locker rooms is “next man up” and for the Jets, this statement rings true.

QB Zach Wilson hadn’t given up any interceptions in multiple games and then threw three INT’s against the Patriots’ 4-4 defensive scheme.  Wilson will have to adjust to new receivers and running backs and a portion of his offensive line in order to continue making good things happen for the Jets.  There are still nine regular season games left and the Jets still have plenty of opportunity to show the pundits that this team is for real and keep this season relevant and respectable.