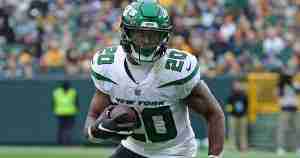 Jets fans should be somewhat excited right now with a third win in a row and what looks to be a bona-fide winning streak for the Green and White as the Jets took care of the Denver Broncos on Sunday with a grindout 16-9 final score.  However, injuries are starting to mount after this week’s victory and these losses will no doubt be keenly felt in the coming weeks of the season.

Zach Wilson  -getting it done any way he can.

Quarterback Zach Wilson certainly isn’t going to be a high pick on anyone’s fantasy football team this season.  In fact, Wilson may be one of the last QB’s anyone wants to select as a fantasy player.  That being said, Zach Wilson has been instrumental in helping lead the Jets to a three game winning streak and an overall 5-2 record.  The most interesting aspect of Wilson’s QB numbers is not what he’s doing on the field but what he isn’t doing and that’s winning games in the air.

With a 72.8 QB rating through Sunday, Wilson completed 16 for 26 passes for a grand total of 105 net yards.  With the Jets’ win, Wilson became the first QB since Tim Tebow in 2011 with the Broncos to win consecutive games while putting up 105 or less net yards passing.  Wilson and the Jets offense haven’t given up an interception or a fumble in three games as well which is remarkable given Wilson’s own playing history of turning over the ball in critical game situations.

The Jets defense leads the way-again.

This may start sounding like a broken record but the Jets are now rapdily becoming a defensive team under head coach Robert Saleh.  Maybe this transition is natural given the fact that Saleh is a defensive coach originally and that influence is permeating to the “dark side” of the Jets game plans.  Rookie CB Sauce Gardner is developing a strong argument for being nominated as the Defensive Rookie of the Year with his continual shut-down performances as he gave up a grand total of three passes for eight net yards to Broncos backup QB Brett Rypien.

Gardner added to the cause by leading the Jets defense with a team-high ten tackles on Sunday, the first Jets DB to lead the team in game tackles since 2018.  While only recording one sack and six QB hits, the Jets defensive lin again helped dominate an opponent offense.  As a defensive unit, the Jets have allowed in the last five games scores of 27,20, 17. 10 and now only nine points (three FG’s) which has translated to the Jets offense needing less and less points to actually win football games.

Game injuries may take its toll on the Jets’ future game plans.

Rookie RB Breece Hall scored the only touchdown in Sundays’ win over the Broncos and after logging in a great 62 yard run for the TD, may unfortunately be out for the rest of the season due to a suspected ACL tear in his knee.  While awaiting medical confirmation of the injury with Hall’s diagnosis, more than likely the Jets have lost their star rookie RB for the season.

Along with other injuries to offensivel lineman Alijah Vera-Tucker (elbow) and WR Corey Davis, three key offensive injuries at mid-season come at the most inopportune time.  Whether these untimely and unfortunate injuries derail the Jets and their winning ways is unknown at this point.  RB Michael Carter is still healthy and can take on the running game load for Hall and WR Denzel Mims did come in to Sunday’s game in relief of Corey Davis.  Inevitably, football game plans are changed by injuries and how the Jets respond to these new challenges will help shape the outcome of the rest of the season.