With the newness of the 2022-23 NHL season out of the way, the New York Rangers sit with a comfortable 3-1-1 record and currently are in second in the Metro Division.  By all means, the early season has been a relative success for the Blueshirts.  However, long-time sports fans know too well the dangers of complacency and being satisfied with “second place.”

The Rangers have early season positives to build on. 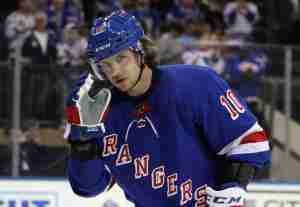 The Rangers started the season out with a statement victory over the Eastern Conference champion Tampa Bay Lightning 3-1.  The entire team played as a cohesive unit and pulled out a major victory against their postseason foes (and potential opponent again in this year’s postseason.)  The Rangers special teams have been stellar early this season with both the power play and penalty kill units making an impact on games.  The Blueshirts have won 50.9% of their faceoffs so far which alludes to strong puck control on both ends of the ice.

The Rangers do have hot shooters right now with Artemi Panarin and Mika Zibanejad not only leading the team but sitting in the top ten point scorers in the NHL.  Panarin leads the NHL right now with a total of 11 points including three goals and eight assists while Zibanejad has seven points.  In fact, Artemi Panarin just tied a franchise record set by Rod Gilbert in 1971-72 for the most points socred in the first five games.

Complacency early on can kill a season quickly.

Despite the early succeses in both goal scoring and the dominance of special teams play, the Rangers have notably become complacent in some of their games including a road loss to the listless Winnipeg Jets and most recently an overtime 3-2 loss to the San Jose Sharks.  The overtime collapse to the Sharks was notable in the classless and fundamentally foolish booing of former head coach David Quinn by the Rangers faithful at Madison Square Garden on his return to New York with the Sharks.  In addition, the total collapse of the Rangers in overtime gave away what should have been another win.

The Rangers are truly off to a solid season start but complacency and lethargy can easy kill any momentum that the Blueshirts built with their early victories.  The NHL season is a grind with 82 regular season games and while opening week wins are big, wins in December through March are even more important.  The Rangers need to keep their eyes and their energies focused on winning each night and play every single period like their season depends on it.

Halak finally gets a “W”