Sunday, December 4th, 2022
THE LATEST
Home Jets Jets: Can you believe three in a row?

Did Christmas come a bit early this year?  When you wake up on Monday morning and read that the New York Jets are 4-2 with a three game winning streak, you have to shake your head and say “wake up,” right?  No, Jets fans you’re not sleep walking or in some demented NFL dream only to wake up and find our your team is 0-6.  The New York Jets, yes, the New York Jets are 4-2 and coming off a statement victory on the football hallowed grounds of Lambeau Field by beating Aaron Rodgers and the Green Bay Packers 27-10 yesterday.

Zach Wilson played little more than game manager yesterday and he played his role well.  Only throwing ten for 18 for 110 yards and no TD’s, Wilson’s passing stats did not really matter.  Only a cold, wet, drizzly day in northern Wisconsin, the Jets went truly old-school and straight out an old Big Ten playbook decided that three yards and a cloud of dust was the way to grind down this game.

However, with the tandem of young RB’s Breece Hall and Michael Carter on your sideline, the ground-and-pound game took every bit of its toll out of the Packers defense.  Breece Hall put in another marquee performance on Sunday running the ball for 116 yards and a 34 yard TD run while still making two additional catches.  RB Michael Carter came in especially in the fourth quarter to spell out the death knell for the Packers and grinded out additional yardage to put the finishing touches on a 27-10 statement game.  This is a fun statistic: The Jets are 4-0 when Breece Hall scores at least one TD in a game.  Simply put – give Hall the ball and let him score every game.

The pundits were truly puzzled reporting about the Jets yesterday and couldn’t stop talking about the Green and White’s defense.  When was the last time anyone ever talked abou the Jets defense for goodness sakes?  Well, the Jets defense made 38 year old Aaron Rodgers look and feel more like a 48 year old out there as he spent far more time investigating the Lambeau Field grass than he would have liked.  The Jets defense was lights out against the Packers and the secondary, led by CB Sauce Gardner created havoc on the back end (he did come out for a while on an injury but later returned to finish out the game.)

I don’t honestly remember in recent memory a defense that man-handled Aaron Rodgers so ruthlessly and efficiently as the Jets did on Sunday. I’m sure that head coach Robert Saleh, a defensive coach by nature, had warm fuzzy feelings all over the place watching his defense dismantle the Packers. 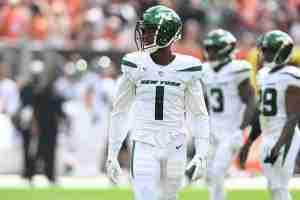 Usually special teams only gets mentioned after games for the mistakes they made but after Sunday the Jets special teams units truly were special in this game.  With a blocked field goal and two blocked punts including a 20 yard scoop and score TD by Will Parks after a block by Micheal Clemons, the Jets special teams units put on a clinic yesterday in how to help win a football game.  The only hiccup yesterday was a 53 yard FG miss by Greg Zuerlein but a long range miss in the cold drizzly rain at Lambeau can easily be forgiven as he connected on two other FG’s and made all of his extra points.

Okay, it’s only six games into the NFL season but let’s put this into proper perspective.  The Jets have won the same amount of games six games into this season as they did all of the 2021 season.  Zach Wilson thrived in the role of game manager and offensive coordinator MIke LaFleu took full advantage of the Jets burgeoning ground game to take sound control of this game.  There’s a long way to go in this season but the New York Jets are starting to look like a respectable, competitive football team.

The reminiscent chants of “Mike White, Mike White” could be heard again as the…