September 27, 2022
THE LATEST
Home Jets Joe Cool leads the Jets to Miracle by the Lake 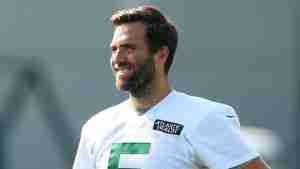 Joe Flacco has never won a regular season game in a Jets uniform.  Yesterday looked like another big loss for the Gang Green until the last two minutes of the game.  For many years to come, Joe Flacco will remember this “Miracle by the Lake” as his first Jets win and man oh man was this a big win.

After last week’s 24-9 beatdown, it looked like the Jets were in another season but the same old story – let’s lose a bunch of games early in the season and make fans wait until October for the first victory when we’re already behind in the AFC East.  Yesterday’s 31-30 comeback victory wasn’t just special but truly spectacular for a variety of reasons.  The win against the Cleveland Browns in Cleveland was Joe Flacco’s first win as a Jet.  It was the first Jets win in September in quite a while and it immediately keeps the Jets relevant early on this season.  For a pair of Jets rookies, this game announced their arrival in the NFL and their performances yesterday helped seal the deal.

Joe Flacco is 37 years old and I’ve made no bones about his age.  Yes, he’s getting up there and Father Time may keep checking his watch on Flacco but after watching nearly 39 year old Aaron Rodgers help lead the Packers to a convincing win last night, Joe Flacco is, well he isn’t that old.  He certainly wasn’t that old to put on a great performance against the Browns and was 26 for 44 passing with 307 yards and three TD’s for the greater Jets cause.  That same 37 year old QB also generated a 110.7 passing rating yesterday – not too bad for a day’s work in the NFL.  Last week against his old Ravens, Flacco was anything but accurate and looked outright stale with an anemic 24 for 59 passing day and an even TD and INT.

Going into the final minutes of the game, it looked as though the Browns would wrap this game up and most fans and pundits probably thought the same as well.  With 1:55 left in the fourth quarter and down 30-17, what do most fans do?  Time for a bathroom break or head to the kitchen before the post-game show and the next game starts, right?  If you did leave your TV set before this one finished up, you missed quite a Jets classic.  Thank you Browns kicker Cade Young for missing that last extra point which kept the Browns lead at 30 and not 31 which later became significant.

Flacco was able to put together a drive and make things interesting by throwing another TD and making this game 30-24 with 1:20 left.  Enter Jets punter Braden Mann (aka the Jets new extra backup QB with his fake punt pass.)  Mann executed a textbook onside kick (which by the way has a less than 20% success rate in the NFL) and the Jets recovered their own kick in front of their sideline.  The rest is history with Flacco engineering a drive that went down and scored the tying TD and with the extra point made, the Jets pulled off something that hasn’t been seen by their fans since Vinny Testaverde pulled off the “Monday Night Miracle” way back in 2000 when the Jets downed the Miami Dolphins.  Kudos also goes to Jets rookies Garrett Wilson and Breece Hall who greatly contributed to this Jets victory.  Wilson had a fantastic rookie day with eight receptions for 102 yards and two TD’s and Hall who had seven carries for 50 yards and a TD reception as well.

The Jets should feel good about this early season victory and Joe Flacco should savor this comeback story but not for too long.  NFL players have to have a short memory of both wins and losses because the Jets have the downtrodden but ever-dangerous Cincinnati Bengals next week and after dropping two games in a row to a field goal, Joe Burrow & Company will be looking to take out their frustrations on the Jets.