October 05, 2022
THE LATEST
Home Devils Where did the idea for the Devils new controversial alternate come from?

On a day that saw the Devils score four unanswered goals leading to a third-period comeback win over the back-to-back Stanley Cup champions, Tampa Bay Lightning. The hockey world lost their mind over the Devils’ brand new leaked alternate jerseys.

Devils fans finally get their black alternates. Kind of.

For years, Devils fans have been begging the organization to release an all-black jersey, and they finally got their wish. However, let’s just say the initial reaction the jersey received is not too positive. Tweet after tweet, hockey fans took turns bashing the jersey. It was harder to find a tweet complimenting the jersey than it is finding a reasonable Philly fan. That being said, barring any major changes to the jersey, Devils fans will be stuck with this one for the foreseeable future. Similar to when fans were outraged over the jersey change from a few years ago, they’ll have to tough it out again.

Where do the ideas for this jersey even come from?

I wasn’t a fan of when they recreated their home and away jerseys, and I’m not a fan of the new jersey either. All they had to do was replace the green in the heritage jerseys with black. Yet, the Devils tried replicating the home jersey of the Newark Bulldogs, a former minor pro team who played in New Jersey for one season in 1929. The stripes on the alternates resemble that of the Bulldogs jersey. The only changes are that the jersey reads Jersey instead of Newark, and there is no bottom stripe. This isn’t the first time the Devils and Adidas have decided to take pieces from the Bulldogs jersey. Their current home and away jerseys have a stripe at the bottom to represent the Bulldogs. 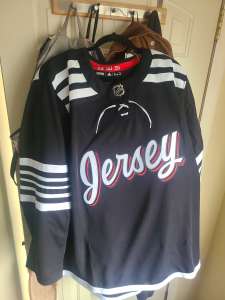 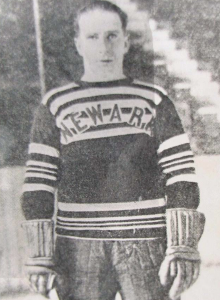 Devils fans hated the new jerseys when they removed the bottom stripe but got used to them. Devils fans will get used to these ones too. Hopefully, once they have numbers and a last name on the back, they’ll look more professional and not like a jersey you’d create when starting an EASHL club team. As long as the team is winning in the jerseys, fans will learn to like them.