NBA Summer League is back, and for the Brooklyn Nets, this year’s tournament is more important than usual.

With the Nets using every one of their five draft picks, even trading for an extra first-rounder, this year’s Summer League is crucial to see how these new rookies might fit into this Nets roster.

With last season’s cancelation not impacting the Nets, only adding second-rounder Reggie Perry through the draft, it’s the complete opposite this year. 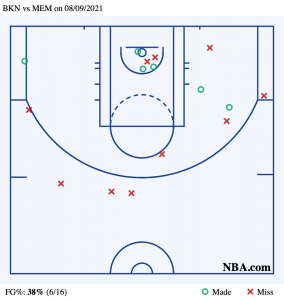 With a lot of the hype surrounding the Nets’ two first-round draft picks Cameron Thomas, and Day’Ron Sharpe, it came as a surprise not to see them in the starting lineup in the first game against the Memphis Grizzles. However, both played exceptionally well, showing that they have the upside to compete at the next level and possibly play a role throughout the regular season.

Even though Thomas did not start the game, he played his way into getting more minutes, ending with the second-most minutes on the team with 24:55. Thomas’s first half was a rocky start, as he went 1-7 from the field, but it was clear that his offensive skill was not overhyped. He was able to get anywhere he wanted on the court and create his shot. The shots started to fall in the second half, going 5-9 and scoring the second-most points in the half with 14, only behind Grizzle’s second-year player Desmond Bane, who had 17 in the half.

Thomas’s shooting chart, presented by NBA, in this game is a window into his complete offensive game, which is raw but has very few weaknesses. His ability to drive and draw contact for a foul was going 6-8 from the free-throw line and finish in traffic, going 3-5 in the restricted area. He also can take pull-up midranges in people’s faces and the confidence to extend his range well beyond the three-point land, even though they did not fall in this game.

His one made three was off a catch-and-shoot play where he found himself wide open, and when playing alongside James Harden, Kevin Durant, and Kyrie Irving, he will have many open catch-and-shoot jumpers.

"Once I got a nice rhythm, I felt like I was pretty, you know, just basketball from there on.”@24_camthomas dropped a team-high 19 points yesterday in his pro debut ?

Sharpe, who only got to play 14:25 minutes in this game, came out with energy and is pretty much what his scouting report said. In only 14 minutes, Sharpe was able to have the second-most rebounds on the team, tie for the most blocks and steals, and tie for the most defensive rebounds. He also finished the game with the highest +/- on the team, with 14.

Energy is Sharpe’s strength, and he put that on display in a short amount of time in this game. It would be nice to see him in a more significant role this Summer League because his energy and toughness could benefit this Nets roaster, even if he doesn’t get many minutes. On top of that, he took a smooth midrange jumper that fell, showing that he has the potential to extend his range.

Surprisingly, not one of the Nets’ second-round picks played in this first game, which is surprising. In the press conference after the draft, General Manager Sean Marks seemed to speak highly of them. It will be interesting to see how that plays out and what opportunities they will get this summer.

It might look like they might spend the start of the season playing for the Nets G-League affiliate before we see them play on the Nets’ regular-season roster.

Alize Johnson and Reggie Perry are the two players who had roster spots on the Nets last season who are participating in Summer League this season. Perry spent most of his time the Nets G-League affiliate in the G-League bubble the previous season but played well and made his way back to the roaster when the bubble was over. Perry only played in 20 games averaged only 8 minutes a game. Johnson was signed on a 10-Day contract and worked himself a contract for the rest of the season, staying on the roster playing 18 games and only averaging 10 minutes an appearance.

Perry did not have the best first game, going 2-10 with just 6 points, but he did lead the team in rebounds with 12. He and Sharpe might be battling for a spot on the roster, and the next few games might be the deciding factor of who starts the season on the Brooklyn Nets or the Long Island Nets. Johnson played well, scoring 13 points on seven shots, along with seven rebounds. The Nets defiantly want to keep him around as a solid wing defender and energy player on the back end of the bench.

Oddly enough, NBA fans will recognize Brandon Knight on the roster. The eight-year veteran point guard played the most minutes on the team, with low scoring efficiency and zero assists. Knight might be a fill-in roster spot, but we will see how that goes.

The Mets 2023 Hall Of Fame Class: Models Of Inspiration