With the 255th pick of the 2020 NFL Draft, the New York Giants closed out the three-day proceedings by taking Tae Crowder, inside linebacker from the University of Georgia.

Marking the end of one of the sporting calendars hottest events, GM’s around the league were picking up the phone to call some of the most talented young players who weren’t lucky enough to hear their name read out by NFL Commissioner, Roger Goodell.

The following players all agreed to deals with the Giants through summer camp, in a bid to win their way onto the main roster come September.

While the story of the underdog is one the NFL loves to champion, more often than not we are talking about a fifth-round pick, for example, turning out to be a Pro Bowl talent.

There is one thing finding hidden gems later in the draft, but to go 255 picks deep and still have not unearthed some of them is a very hard feat. In Layman’s terms, we’re not expecting the 2020 UDFA’s to be bonafide starters by Week 8 per se, but perhaps being able to add something to the team as it is now.

Here are 5 UDFA’s on the Giants’ current roster who have all overcome the odds to contribute to the team in some way, shape, or form already.

New quarterback Cooper Rush would also be applicable here, but he has yet to take a snap for the Giants. Alex Tanney entered the league in 2012 after going undrafted out of NCAA Division III college, Monmouth (Illinois). Eight years later, Tanney is still making NFL rosters having been on the books of eight different franchises; Kansas City Chiefs, Dallas Cowboys, Cleveland Browns, Tampa Bay Buccaneers, Tennessee Titans (twice), Buffalo Bills, Indianapolis Colts, and the Giants. 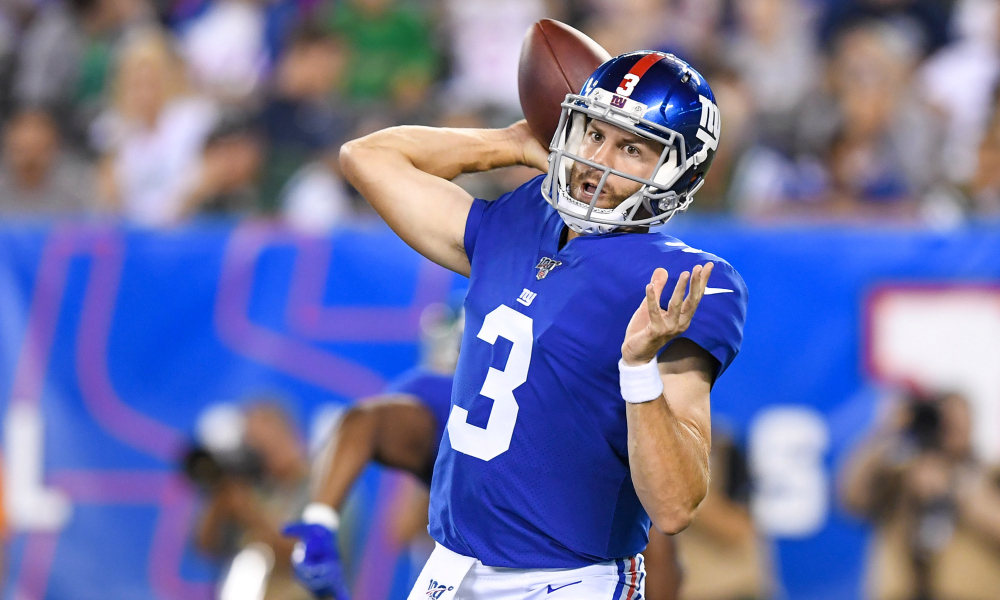 Having said that, he’s only actually played in two NFL games, one for the Titans in 2015 where he threw 10/14 for 99 yards and one touchdown, and just one single pass for the G-men in 2019, which he completed for one yard against the Miami Dolphins. Although this might sound measly, Tanney has been a consummate professional his entire career, with his locker room leadership skills likely being the reason why he’s lasted eight years in the league. For Case Cookus, coming from a small school in Northern Arizona, he’ll have to show his worth to the team not just on the field, but off it too.

Cookus can learn a lot from a guy like Tanney, especially when it comes to longevity. Find your USP and work on it. Whether Cookus is trying to take Tanney’s spot or not, you would hope he can pick up a thing or two from the veteran signal-caller. 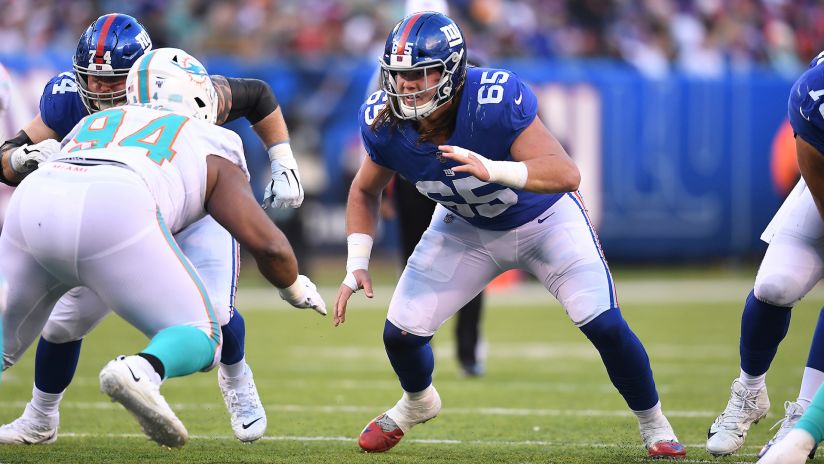 Probably the brightest UDFA talent on the current Giants roster, Nebraska alum Nick Gates could be a key starting piece on the Big Blue O-line by the end of 2020. Gates won over the coaching staff through summer camp in 2019 and played in every single game during the last campaign, as well as starting three times when a number of starters such as Mike Remmers and Jon Halapio went down with injuries.

Gates’ importance to the team comes down to his flexibility to the player a number of positions across the O-line. He’s taken snaps at both guard and tackle and is even being touted as a possible long-term solution to the revolving door that is the New York Giants’ center position. Rhode Island’s Kyle Murphy has already had rave reviews from fans who believe the Giants have found a rock in the small school tackle, with Louisville’s Tyler Haycraft will also bidding for a roster spot.

Learning from Gates would be key, and their best bet of joining an already over-crowded front line which includes recently drafted Andrew Thomas, Matt Peart and Shane Lemieux is showing their capability of slotting into a number of different positions.

Having went to high school just nine miles from Met Life Stadium, before attending nearby Rutgers University for his senior year, New Jersey native and childhood Giants fan Hilliman earned himself a camp invite after going undrafted in 2019. 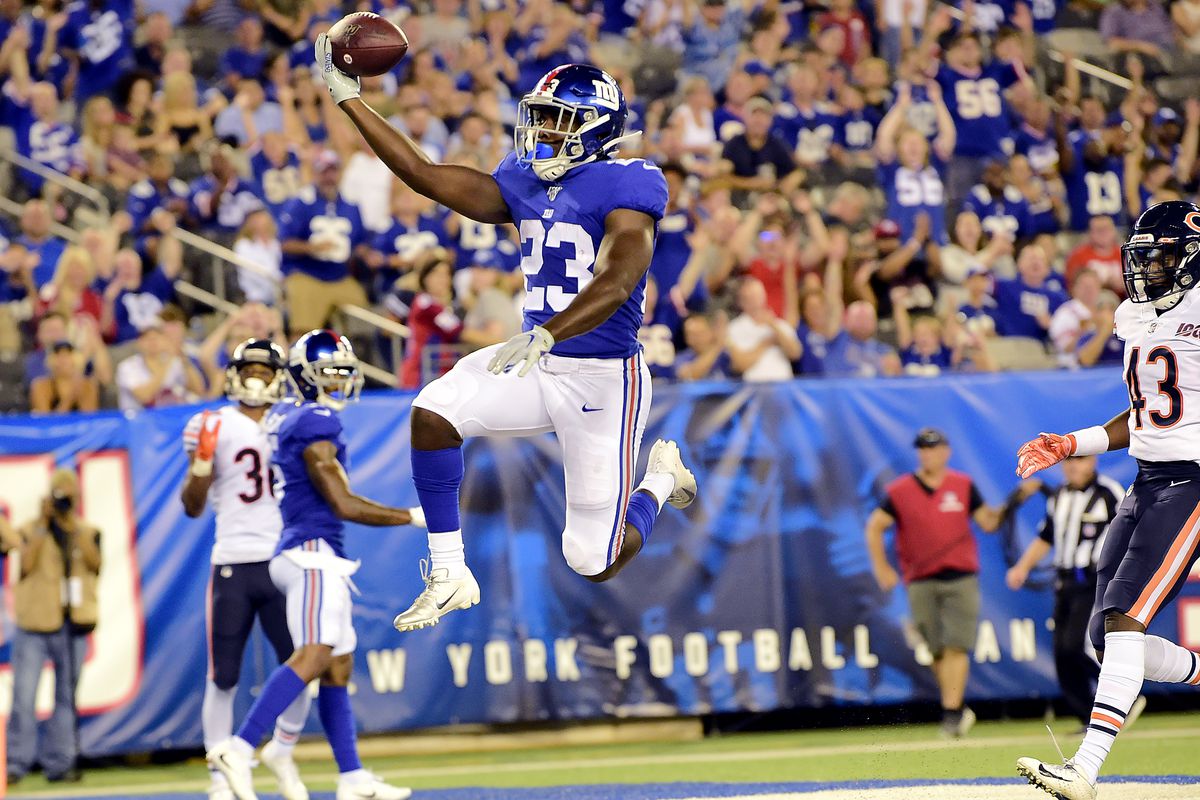 After four years at Boston College and one year with the Scarlet Knights, Hilliman was promoted from the practice squad in September and took a number of snaps in three games, versus the New England Patriots, Minnesota Vikings and Washington Redskins. He recorded 91 yards from 30 rushes, backing up Wayne Gallman during Saquon Barkley’s inactivity due to injury, before being returned to the practice squad when Javorius ‘Buck’ Allen was picked up on waivers.

Maryland back Javon Leake was a surprising omission from the draft day activities, despite rushing for over 700 yards and eight touchdowns in his senior season with the Terrapins. Hilliman signed a futures contract in December, meaning he’d be back in camp this summer to battle with Leake. He clearly did something right to be trusted to be RB #2 for three games, especially for a guy who of course, wasn’t drafted.

Michigan-born Scott went undrafted in 2018 after leaving Fresno State as one of the most underrated kick returners in the NCAA. He recorded over 1500 yards on kick returns, which earned him a deal with the Cleveland Browns.

Despite never taking to the field in an NFL game for the Browns, he was picked up by the Buffalo Bills and instated onto the active roster just three days later. He was only used on special teams and wasn’t given the chance to return any kicks, before being claimed off waivers in July 2019 by the Giants. Scott’s involvement with Big Blue increased throughout the season, as special teams coach Thomas McGaughey mixed up his options on the return game, with Cody Latimer and Corey Ballentine both given the role.

Scott recorded 110 yards from four returns, including one for 35 yards, and also caught two passes for 22 yards. Ohio State duo Austin Mack and Binjimen Victor, and LSU’s Derrick Dillon weren’t on special teams in college and will be competing for key receptions alongside Sterling Shepard, Darius Slayton, Golden Tate, and Corey Coleman. Scott will be trying to emulate fellow wideout Cody Core, who cemented his place on the roster due to his stellar displays on special teams.

Slot corner Grant Haley was a team-mate of star running back Saquon Barkley at Penn State, and the two appear to be very close. Despite running an impressive 4.44 seconds in the 40-yard dash at the NFL Combine, his fortunes in the 2018 Draft couldn’t have been any more the polar opposite than college comrade Barkley, as he went unpicked through seven rounds. Snagged by the Giants shortly after the draft, Haley was promoted to the active roster in October 2018 from the practice squad.

He finished the season with nine starts in ten games, 33 combined tackles, three tackles for a loss and two passes defended. Pro Football Focus ranked Haley as the fourth-best rookie cornerback at the end of the 2018 season, some accolade for a guy who had to compete with early draft selections such as Denzel Ward (#4 to the Browns), Jaire Alexander (#18 to the Packers), Mike Hughes (#30 to the Vikings), as well as eight cornerbacks from Day 2 of the draft. A total of 29 cornerbacks were picked in 2018, so Haley’s impressive feat showed how far he had come from April to December that year.

In 2019, Haley started just three games after the emergence of Julian Love out of Notre Dame in the slot, but he did play in all but one game last season. He made 43 combined tackles, four tackles for a loss, and a sack. Haley isn’t the first name on everyone’s lips when you think of the Giants’ defensive back position, but he’s carved out a tidy career for himself during his first two years in the pro game.

Christian Angulo (Hampton), Malcolm Elmore (Central Methodist) and JaQuarius Landrews (Mississippi State) are the three DB’s lined up for camp this off-season, bidding alongside recent additions in the draft; Darnay Holmes (4th Round) and Chris Williamson (7th Round) for a place on the 52, or at least the practice squad.

Haley is undoubtedly one of the best UDFA pickups the Giants have acquired in recent years, so any of the three above would do well to follow in his footsteps.

The Giants are Getting Back Reinforcements at the Perfect Time