When Joe Judge was first announced as the new Head Coach of the New York Football Giants, the announcement was met with a ton of quizzical looks, raised eyebrows and a general “Who?”

Nope, not that Judge…

First, let’s clear this up…Joe Judge is not to be compared to Judge Judy or Judge Joe Brown. There is no relation. But, given his introductory news conference, Joe Judge will hold his players as equally accountable for performance as Judge Judy and Judge Joe hold plaintiffs and defendants accountable during the TV trials.

Let’s also clear this rumor up…Joe Judge is no relation to Aaron Judge. I’ve checked everywhere, and short of performing DNA tests, nothing. But, let’s be real. Would Joe Judge turn down the opportunity to have Aaron Judge try out as a Tight End prospect for his Giants? Probably not.

There are two relations that are undeniable as far as Joe Judge is concerned; working on the staff of Nick Saban at Alabama, and spending the last eight years working with Bill Belichick. If you are determined to become a head coach in football, there are no better mentors than those two active coaching legends.

Joe Judge gets rave reviews and compliments from everyone that has worked with him (players and coaches). What I’ve noticed most this offseason is the Giants fan base is more accepting of Joe Judge and not roasting him, the owners and GM for the choice.

People went from asking “Who?” to saying “Yes!” pretty quickly after that first news conference, likely because Joe is a product of those two coaching trees.

When you get a ringing endorsement from Bill Belichick, not much else matters. 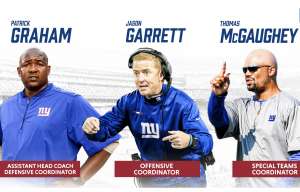 My sense so far in tracking Joe Judge, he is going to be his own man. But you cannot help thinking he’s a little bit Bill Parcells when he states he is bringing “an old-school, physical mentality.” Then add a little Tom Coughlin when he says, “We’re going to start by showing up on time, by having a plan and executing that plan.” Finally, add a heaping shovel of Bill Belichick when he says, “It’s going to be fundamentals.” To some observers, Joe went overboard with his “We will punch you in the nose for 60 minutes” statement. But, after seeing some of the weak tacklings by our team this past year, I love the “earn it” approach and attitude. I was almost disappointed he didn’t quote his mentor’s, “Just do your job.” 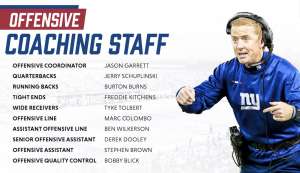 True to his word, Joe Judge said he was going to take his time in putting his coaching staff together. On Tuesday, nearly one month after being hired, Joe announced his coaching staff. Granted, we all got to hear the media and social media report and comment on coaches as they were selected. But to hear from Joe why each was hired was absolutely refreshing.  He looked for coaches that could reach inside the players and get each player’s maximum performance to show on the field.

Jason Garrett becoming the Giants Offensive Coordinator led to the liveliest conversations on social media. Most of the Twitter world only know Jason as the former Head Coach of the Cowboys. But, Jason was a four-year backup Quarterback for the Giants under Jim Fassel. He also happens to have led a top 10 offense for the last few years.\

The O-side coaching staff is a great blend of former Cowboy, Patriots, and Crimson Tide coaches plus Tyke Tolbert returning to coach wide receivers. We’ve got the skill players. Now we need an offensive line that can take over the game. 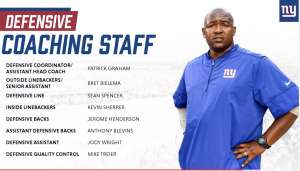 Patrick Graham becomes the Giants’ Assistant Head Coach and Defensive Coordinator. Graham has ties to Joe Judge from their Patriots days. If there is one unit that needs to come together and dominate the field, it’s the defense. So much was made of the Giants D confusion on the field and the surrender of so many big plays. This is where the “teaching” is most critical.

Our entire defense is young. Coach Graham has some serious work ahead of him. But I really like his talk about multiple schemes and flexibility. And how can you not be excited with a coach whose nickname is “Coach Chaos”! Keep an eye on the improvement of the defensive line under Sean Spencer.

One of my favorite hires was keeping Thomas McGaughey as Special Teams Coordinator. This was the best unit of the Giants’ last two years. Joe Judge knows Special Teams…and knows a good unit when he sees one.

Bang the Gavel: Court is in Session

The real work begins now for this staff. The Giants have a good number of key pieces and talented players.  Yes, they have holes.  They will evaluate the roster, grade each player and begin to meet with players (as the NFL rules permit).

I like the coaching staff Joe Judge has put together. There is an energy and intensity about this group. You can see it and feel the vibes.

Now, to build a team.