The Devils just can’t seem to close out games and something needs to change.

Here are a few things that might be the reason for all of this.

Starting at the beginning of the season, the lineups for both the offense and defense have been unbelievably bad and weird, to say the least. An example is how Nikita Gusev is sitting on the 3rd line right now and he has gone from 2nd to 4th, to 3rd line. He needs to stop being moved around. Also concerning is that Jesper Bratt and Jesper Boqvist are both scratched for the time being. However, Jesper Bratt is the bigger concern out of the two Jesper’s. He played almost all of last year on the 2nd or 3rd line and now he’s scratched? It doesn’t make sense why he is scratched because he was playing well for the first few games of the season. It’s just weird to see this for him when he is one of the better players on the ice for Devils.

Another personnel issue is that the Devils just are not good enough defensively or in goal. Starting on the defense, it has to be better, especially in the 3rd period. It has been awful right from the start of the season. It’s in part of some early injuries but overall it needs to be much better. They are making dumb and unnecessary plays that didn’t need to be made. If they just changed some of the things they did they would probably have a few more wins. Now on the goaltending, jeez it’s been bad. It’s been mostly on Mackenzie Blackwood, however.

Cory Schnieder has looked good in the games he’s played. He seems to be fully healed from his hip surgery and he has made some key saves that have kept the Devils in games. He has been let down by the defense though. When Mackenzie Blackwood is in goal though, it’s a different story. He has played very poorly in a few games and the game against the Coyotes was one of them. He let in 4 goals on 17 shots which is really bad. He has not been able to play well and it’s strange because he looked decent in the 10 games he played last year. The Devils are expecting him to play around 20-25 games this year and he needs to be better if he wants to eventually become the starter here in New Jersey.

The mindset of the Devils has to change when entering the 3rd period and when they have the lead. Starting with the 3rd period, the team needs to change the way that they play and think in the third period. Every time it seems like the Devils either give up or don’t press as hard when they enter the 3rd period. They should be pressing even more in the 3rd instead. They also seem like they just stop trying with around 5 minutes left. It is very noticeable especially if they are losing a game. Now moving onto when the Devils have the lead. They get complacent. That’s the brunt of it. They are complacent when they get the lead. They lay back and don’t press. They think the goaltending will bail them out and that the other team will stop trying because they are losing.

The worst thing to do is to get complacent when playing against any team at any time. It just comes down to basics and the Devils just need to continue to press and make sure they stay on top of whatever team they are playing. If they don’t, it’s going to be a long season. 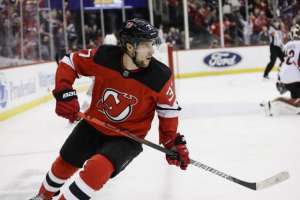 John Hynes has been particularly frustrating this year. He has been shuffling around lines every game and the team has no stability. It’s been all over the place. His decision making and effort to change things have been extremely bad. The team has especially bad when the Devils have the lead going into the third period. For some reason, Hynes likes to stop the attack and changes the lines for no reason in the third period. He also has been changing from an aggressive attack to a complete defensive box even when the Devils are only up by one goal.

The fans are seeing it too and they want something to change. At one of the games this year, some fans were chanting “Fire Hynes, Fire Hynes”. This is concerning to see from the fanbase and Hynes is definitely on the hot seat. He needs to change things as soon as he can or he might be gone by the midway point of the season.

Overall, the Devils need to be better when they have the lead and in the third period. The things they need to fix are their personnel, their mindset, and their coaching. It needs to change or the Devils will continue to slip in the standings and nothing will get better here in Jersey.