With the Devils’ off-season being ranked the best in the league by NHL.com, it seemed like the perfect chance to talk about the biggest acquisition out of all of them. That being a healthy Taylor Hall. Yes, the Devils did trade for P.K. Subban and get Jack Hughes with the first overall pick. But those don’t compare to what Taylor Hall bring to the Devils.

Last season, Hall only played in 33 games but had 37 points. He was the team’s point leader until his injury that knocked him out for the rest of the reason. But when Hall is healthy, we really see what he can do. By looking at his league MVP winning season, it really shows what Hall is capable of. His 93 points in 76 games was the team lead and helped the Devils get back to the playoffs for the first time in six seasons. 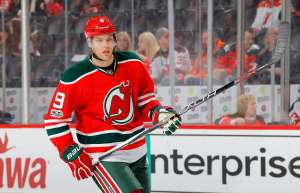 Hall brings something to the Devils that they have needed for a long time, which is a true star player.  Since during that MVP season he single-handedly dragged the Devils to the playoffs, everyone expected him to have another amazing year. And once the injuries hit there was nothing he could do. He was the rock of the team and when was out with his injury the Devils were mediocre. After his surgery this summer, Hall says he is ready to go and start playing again.

With Taylor Hall, the Devils are a better team and he makes every player around him better. Hopefully, with him being healthy and with the new talent the team has gotten, it takes some pressure off of Hall and lets him have a fantastic season and prove why he is going to be paid in the 2020 off-season.