After a season filled with heartbreak, injuries, and failure, Devils fans wanted nothing more than the season to be over and win a shot at Jack Hughes or Kaapo Kakko.

Well, mission accomplished on that end, the draft is this upcoming Friday and New Jersey is on the clock picking first overall. What started off as a Hughes vs Kakko debate slowly turned into a Hughes is going #1 no discussion about it. Can that change though? What about the second round? Let’s take a look into picks #1, 34, 55 and 61.

Ranked #1 by nearly every scouting report is Jack Hughes. The 18-year-old Center from Orlando Florida has been described as dynamic, electrifying and elusive. Although small, he still has the power to attack lanes mainly due to his speed and finesse. Hughes captained the U.S. National U18 team where he played 50 games and totaled 112 points (34 goals, 78 assists). Along with the talk of Hughes’ size is the talk that Kakko is more NHL ready. While that may be the case, there has been speculation that Hughes will be the better player in the long run. It’s no surprise that New Jersey needs an elite center, so Jack Hughes should be the obvious choice. Right?…

Winger Kaapo Kakko will enter the league and make an immediate impact for whichever team chooses him. The hardest part here is, if he doesn’t go #1 he goes #2 to the rivals across the river, New York Rangers. Kakko has proven he can play at a high level against “grown men”. Last season Kakko played in the SM-Liiga (Finnish Elite League) which is the top professional hockey league in Finland. Playing for TPS in that league, he managed to tally 22 goals and 16 assists in 45 games. So what if Ray Shero managed to acquire a top center via trade? Could that mean Jersey takes Kakko at #1?

New Jersey also holds 3 picks in the 2nd round at 34,55 and 61. Let’s get right into pick #34. A lot of mock drafts have Prince Albert (WHL) RW Brett Leason drafted in this spot. In 55 games last season Leason tallied 89 points (36 goals, 53 assists). Another option could be Jamieson Rees of the Sarnia Sting (OHL). Another center, Rees tallied 32 points last season. Originally projected in the 47-50 draft spot Jamieson Rees has moved up the rankings. At only 5’10 Rees is a high-energy forward that plays hard and has determination. Either one of these players could add talent to the roster within the next few years.

D-man Mattias Norlinder is a definite option for the #55 pick. Erik Ohlsson from Elite Prospects describes Norlinder as a “Great skater with good offensive instincts, has a great first pass and a good shot from the point”. Playing for MODO Hockey J20 in the Super Elit, Norlinder had 5 goals and 16 assists in 30 games. Rounding out the second round with the 61st pick, New Jersey could be looking at Simon Lundmark. The defenseman ranked in the hundreds by most scouting reports was ranked at exactly 61st by TSN/Bob McKenzie. Also playing in the Super Elit for Linkoping HC J20, Lundmark has 17 points in 25 games. Lundmark also played 28 games with Linkoping in the SHL. Lundmark averaged 13 minutes of ice time with the big club, which is an encouraging sign for any team looking for a d-man that can be NHL ready in a few years.

New Jersey has numerous other picks during the draft. Will Ray Shero keep all his picks? Maybe he trades some picks and the players listed above never make it to the Devils organization. 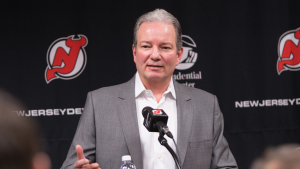 No one truly knows what his game plan is but its both exciting and nerve-racking for fans. Shero came to New Jersey and promised a five-year plan. During that time frame, the Devils have brought Will Butcher, Mackenzie Blackwood, Jesper Bratt, Jesper Boqvist, Jeremy Davies and Ty Smith to the organization just to name a few.

The prospect pool is deep for New Jersey now it’s just getting their game to the NHL Level if they’re not there already. The rebuild may not be as fast as the fans would like, but it’s certainly looking brighter ahead.