There are still over three months to go until the Giants take their first competitive snap of the football, so kick back and relax and give some love to Mets Nation and Yankees Nation for the rest of the summer.

However, with the majority of free agents signed and rookies drafted, it’s time to breakdown game by game Big Blue’s 2019 opponents, and what to expect from them all this season.

WEEK ONE: DALLAS COWBOYS (AWAY)

For the fifth season in a row, the New York Giants hit the road to face the Dallas Cowboys by Week Two at the latest, with 2019 being the fourth time since 2015 that they have kicked off the season at AT & T Stadium. This time around, they will be taking on the NFC East 2018 Division Champions after Jerry Jones’ men came from a 3-5 deficit to make the playoffs with seven wins in their final eight regular season games. In the center of the field, quarterback Dak Prescott seemed to regain some of his stellar rookie season form as the weeks went on, firing his way to his second Pro Bowl and finishing the year with 22 touchdowns and 8 interceptions, a definite upgrade to his average 2017 campaign.

The Cowboys admittedly seem to have only gotten stronger during the off-season, with big part players like Cole Beasley Geoff Swaim and Rod Smith moving on, with the latter actually joining the Giants to add some competition behind Saquon Barkley at running back. In terms of renewing terms, none were more important than locking up edge rusher Demarcus Lawrence for another 5 years, with a $105 million deal for the 2x Pro Bowler. As for the other side of that defensive line, Eli Manning will have to keep his head on a swivel to look out for newly acquired defensive end Robert Quinn, who cost just a measly 2020 sixth-round pick from the Miami Dolphins. Another 2x Pro Bowler, Quinn will earn $8 million on the Dallas defense this year, and is undoubtedly a major QB threat, having still recorded 6.5 sacks last season despite him knocking on the door of 30 years old.

As for free agent pickups, none more have been publicized than the infamous return of tight end Jason Witten, who came out of retirement to represent ‘America’s Team’ one last time. Add Packers receiver Randall Cobb to replace the outgoing Beasley, the Cowboys in no way, shape or form look any less a threat to the divisional title than last year. Dallas had eight Pro Bowlers last season who will all be raring to go to keep their place for 2020, with two players, in particular, looking to build on a strong 2018. Wide receiver Amari Cooper looked well worth the first round pick Dallas spent on him mid-season last year, while former rookie Leighton Vander Esch will no doubt to continue to impress during his sophomore season in the league.

As for the draft, defensive tackle Tristen Hill out of UCF was the biggest name to join Big D with their second-round pick, followed by a former team-mate of Saquon’s, guard Connor McGovern out of Penn State.

As difficult as opening day games can home, the Giants couldn’t have asked for a better opponent to kick off football season at Met Life Stadium than a visit from their upstate neighbors, the Buffalo Bills. Since the turn of the millennium, the Giants have only hosted the Bills twice, playing them only four times in total in the regular season since the year 2000. In their history, the record is perfectly poised at six wins apiece for both sides, with Big Blue winning all three of their last meetings in 2007, 2011 and 2015. Led by their second season QB in the cannon-armed youngster Josh Allen, the Bills are hoping to put up a few more wins on the board this season, and will come into this game having began their campaign at the very same stadium one week earlier, only it is a sea of green, not blue with a divisional matchup against the New York Jets.

Do you know how many Buffalo Bills players made the Pro Bowl in January 2019? One, just one. Granted it was 6x Pro Bowl defensive tackle Kyle Williams, but he was voted on as an alternate to Geno Atkins, Jurrell Casey and Cameron Heyward, so not all that convincing. The truth is, not many guys want to play in Buffalo, just ask Antonio Brown. The Bills were very active in free agency, and they didn’t even really lose a lot of players. The most significant departure was guard John Miller, who signed a 3-year/$16.5 million deal with the Cincinnati Bengals, while tight-end Charles Clay penned a one-year deal with Arizona Cardinals. Among the newcomers to the team are Pro Bowl 2018 kick returner Andre Roberts who signed from the Jets alongside guard Spencer Long, receivers Cole Beasley and John Brown from the Cowboys and Ravens respectively, Jaguars running back T.J. Yeldon, Cincinnati tight-end Tyler Kroft and Kansas City Chiefs center Mitch Morse (among others!)

In terms of individual players and their development, the biggest expectations are undoubtedly going to be on Allen to keep improving after a solid but not earth-shattering rookie season. In terms of rookie rating, Allen fell to fourth behind Baker Mayfield, Lamar Jackson and Sam Darnold having recorded just 10 passing touchdowns and 12 interceptions, with a completion rate of just 52.8%, which even put him behind now-Dolphins QB Josh Rosen. With some new toys to play with so to speak in wide men Cole Beasley and John Brown, as well as tight-end Kroft, Allen will be hoping to boost those stats up as he leads the Bills forward in an unlikely bid to usurp the Champions, the Patriots.

Looking at the draft, the Bills seriously upgraded their D-line by adding Houston tackle Ed Oliver to their side, who was at one point projected to be the number one overall pick, instead of tumbling down into Buffalo’s laps at #9. Add to that the highly rated Oklahoma offensive guard Cody Ford and Ole Miss tight-end Dawson Knox, and the Bills might be feeling like they have a shot of improving their 2018 record this time around.

Back on the road again for Pat Shurmur and the boys, and time for a little warm weather on the West Coast of Florida in Tampa. The Buccaneers has traditionally in recent years been a very winnable one for the Giants, having won six of the last seven games spanning back to 2006. Last season was a shoot-out, with the G-men almost blowing it before holding on late to win 38-35 in New Jersey. However the Giants will definitely want to avoid their last trip to the Raymond James Stadium when a Nick Folk field goal as time elapsed condemned them to a 25-23 defeat, and 0-4 on the 2017 season. Fast forward on, and after a difficult year at QB for the Bucs who chopped and changed between Jameis Winston and Ryan Fitzpatrick like a valley girl undecided on what to wear for the club, they eventually threw their weight of support behind former Heisman Trophy winner Winston, at least for the time being.

Although there has been a fair bit of action in terms of ins and outs in West Florida, the biggest news came as recent as this past week as the Bucs cut ties with 6x Pro Bowler and former #3 overall pick Gerald McCoy being cut from the team, and effectively being replaced with a cheaper but still capable replacement in Super Bowl 2019 runner up Ndamukong Suh. Other additions have included linebackers Shaquil Barrett (Broncos) and Deone Bucannon (Cardinals), Titans quarterback Blaine Gabbert and Browns receiver Breshad Perriman, as well as locking up offensive tackle Donovan Smith. A big loss, however, will be Pro Bowl linebacker Kwon Alexander who snubbed a new deal to sign with the San Francisco Giants.

Once again all eyes will be fixed on the Bucs’ one and only Pro Bowl player from last season, receiver Mike Evans, as he goes for another 1,000+ yard season. He’ll have his work cut out if he wants to beat the outrageous 1,524 yards he recorded in the 2018 campaign, which was only trumped by Julio Jones and Deandre Hopkins, however with Winston fully fit and the unanimous favorite to be QB 1 in 2019, he’ll be hoping to come somewhere near it. 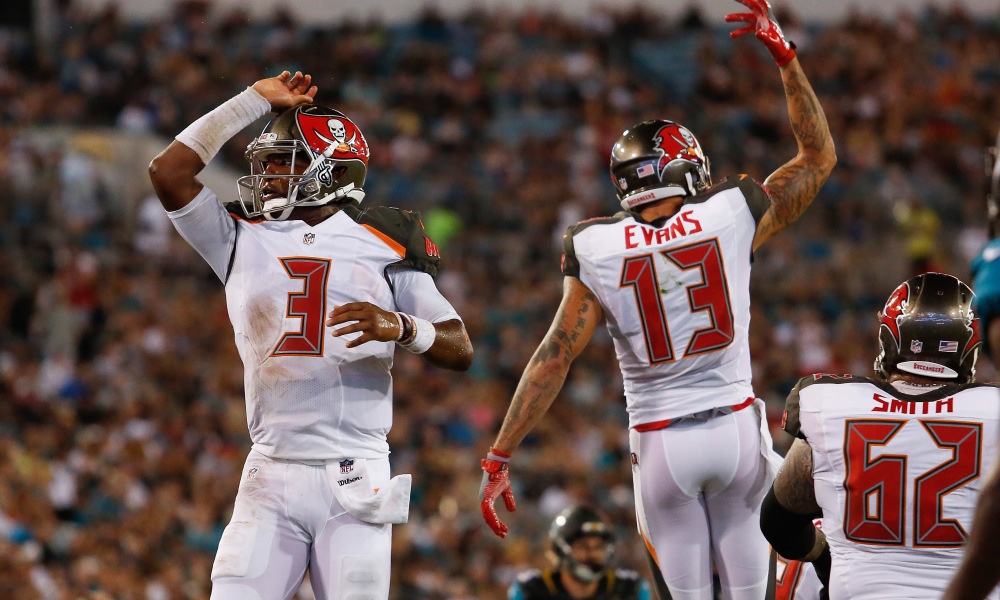 In terms of the NFL Draft, Tampa Bay picked up a beast inside in the form of LSU linebacker Devin White #5 overall, while snagging quality cornerback’s in the second and third round with Central Michigan man Sean Murphy-Bunting and Auburn’s Jamel Dean. White was viewed as one of the best athletic prospects in the draft having an outrageous 123 tackles in 2018, as well as three sacks and three forced fumbles. It’s not going be an easy season for the Bucs, it never is when you have the New Orleans Saints, Atlanta Falcons and Carolina Panthers in your division, and given their tricky schedule you’d be pushed to give them any more wins than they recorded this past season. A real chance for a ‘W’ on the road for the Giants.