Tuesday, February 7th, 2023
THE LATEST
Home Devils What Impact Could Jack Hughes Have on the Devils?

We are getting closer and closer to the NHL Draft, which means we are getting closer and closer to finding out if Jack Hughes is going to be a Devil! There is a lot of hype around Hughes (understandably) so I thought it would be a good idea to scratch the surface and dig a little deeper on Hughes to see what he really could do for the Devils if selected.

I have teamed up with Puck and Pitckforks (@pitchforkedpuck) writer Vinnie Parise (@VinnieParise) to collaborate on this article. We asked each other 3 questions about  Hughes, about what he could bring to team, if he is better than Kaapo Kakko and much more!

Here are my 3 questions that Vinnie answered…

Q: Obviously, there is always a lot of direct comparisons between the top two prospects in any NHL Draft year and this year is no different. Jack Hughes (projected to go #1) and Kaapo Kakko (projected to go #2) are this years top two. What makes Hughes better than Kakko?

A: Vinnie – “Jack Hughes is an incredible play-maker. He also had an underrated shot that people don’t talk about as much. He gets the Jack Eichel/Auston Matthews treatment because of the fact that he’s an American, but Johnny Gaudreau is a smarter comparison as far as American players go. Vision, skating, hockey IQ seem to propel him above his peers.”

Q: All arrows point to the New Jersey Devils picking Jack Hughes first overall but of course it’s not guaranteed. If (and hopefully when) the Devils pick Hughes, what are the top 3 things he will add to the current team?

A: Vinnie –  “1. Excitement. He has a lot of hype surrounding him and it will get people excited to attend games. Picking number one overall is a rare treat for fans and generations can go by without it ever happening. Devils fans have the luxury of it happening twice in three years. It’s an exciting time.

2. A 1-2 punch. Center is the most important forward position. Having a 1-2 punch that can play different situations is key to winning. Crosby/Malkin, Backstrom/Kuznetsov, Kopitar/Carter are some examples of how the recent champions all have great center depth. Hischier and Hughes can be that. Nico will be an all situations center, and Hughes will provide tremendous offensive upside.

3. Organizational impact. Hughes could be the type of player that draws the eyes of others. Free agents might see how good Hughes is and say “I want to play with that guy”. Getting a chance to play with him 5 on 5 and on the power play might make good players look like great players.”

Q: Just getting Jack Hughes is not going to solve all the New Jersey Devils problems but it will definitely help. Who else do the Devils need to acquire this off season that will compliment the current team as well as Hughes?

A: Vinnie – “They need to keep developing the guys in their current system. Ty Smith might be the best example of using the draft to your advantage. He might be able to come in and be an impact player right away. The best teams are build from within. The Devils struck gold with the Taylor Hall trade, so getting him resigned is also a must. If Hall stays with Hughes, Hischier, and Kyle Palmieri this team will be pretty deep at the forward position. The blue line and keeping the goalies healthy and playing well is the big off-season task.”

Q: Jack Hughes has played his junior career as a center, but some projectors have him playing wing in the NHL. What position would you prefer to see him play with the Devils?

A: Stephanie – “I really feel strongly that Hughes should stay playing center. As Vinnie said in one of his answers, Center is a very important position and having a Hischier/Hughes 1-2 punch would be very beneficial for the entire team. I would not be opposed to seeing him try out playing on either wing just to see how it feels and goes, but Center is definitely the position Hughes needs to stick with.”

Q: Jack Hughes has a line-mate on the U-18 World Champions team named Cole Caufield that he has incredible chemistry with. He is an upper to mid first round pick this year, what would you be okay with the Devils giving up to get him along with Hughes?

A: Stephanie – “Cole Caufield is an animal. With the USNTDP, he scored 72 goals in 64 games, that’s insane. He plays on the right wing of Jack Hughes and in the U18 World Championships, they were dominant together. Being able to capture that and bring it to the Devils would be smart. However, I think the probability of the Devils attempting to get him is very low. The price would be too high. The Devils certainly are not going to give up their #1 pick and since there next pick is in the second round at #34, that wont be enough to trade up to a first round. If the Devils wanted to make a serious play for him, they could package their 2020 first round draft pick along with some big name players, but I think that would do more harm than good. Sad as it is, I do not foresee Hughes and Caufield ending up on the same NHL team together.”

Q: Do you think the addition of Hughes, the health of all their players for the majority of the season, and Ty Smith would be enough to get this team back into the playoffs in 2019-20?

A: Stephanie – “I think the Devils have a very good chance of making the playoffs in the 2019-20 season IF Ty Smith and Jack Hughes are part of the team. I cannot see a reason why either of them could not make the team but you never know what can happen. The playoff run the Devils had in 2017-18 was primarily due to Taylor Hall. He willed his team to make the playoffs. If anyone thought that would/could happen again this season, they were not being realistic. However, with no injuries, Hughes and Smith, the Devils have an extremely high probability of making it again.” 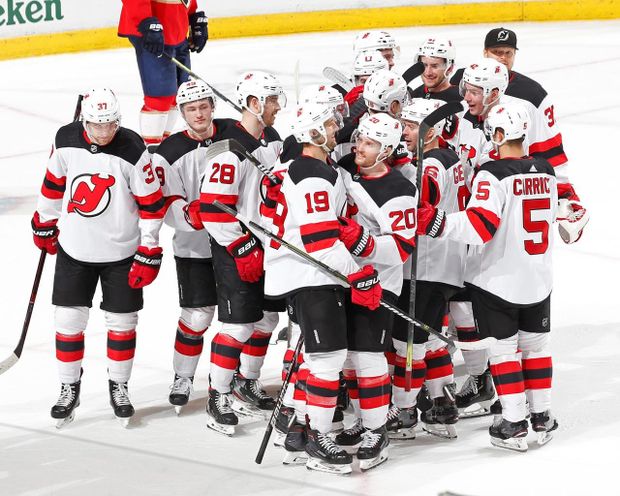