Tuesday, February 7th, 2023
THE LATEST
Home Knicks Hit or Miss – a Review of the Knicks’ Last Ten Years of First Round Draft Picks

Knicks fans are already looking past the final cluster of games of the 2018/19 season, instead focusing their attention’s on May’s NBA Draft Lottery.

There has been more than a fair share of dubious decisions made by the front office at MSG over the years, with many coming through the draft process. A number of ‘what ifs’ for the Knicks in terms of players they could have drafted, or even some they did, but then traded before they had the chance to fulfill their potential.

Well let’s look back at our last ten seasons of first round draft picks (the highest one from each season), and how they got on as both a Knick, and in their future endeavors. NOTE: I’m giving Kevin Knox a pass here, as he hasn’t even finished a full season yet.

The Italian Stallion, Gallo was a ready-made NBA star in the making with his professional pedigree in Europe. Drafted at the age of 20, Knicks fans had a lot of hope for the 6ft 10in power forward, only for lady luck to avert her eyes as after one game of the regular season he was ruled out for the majority of the campaign with back problems.

After 28 appearances, which yielded just two starts towards the back end of the 2008/09 season, Gallinari emerged as a key figure in the 2009/10 campaign, missing just one game all season as the Knicks won 29 games. Gallo’s scoring prowess was a pleasing upside to his game, as he averaged over 15 points per game, coupling that with around 5 boards too (as per basketball-reference.com)

His Knicks tenure came to a premature end when it was announced that he would be a part of the earth-shattering Carmelo Anthony trade, and looking back, he has turned into a very nice NBA player, and still racks them up for the Clippers

Verdict as a Knick: Hit – could have been a very solid player in NYC
Verdict in the NBA in general: Hit
Who the Knicks could have had: DeAndre Jordan, Serge Ibaka, Goran Dragic 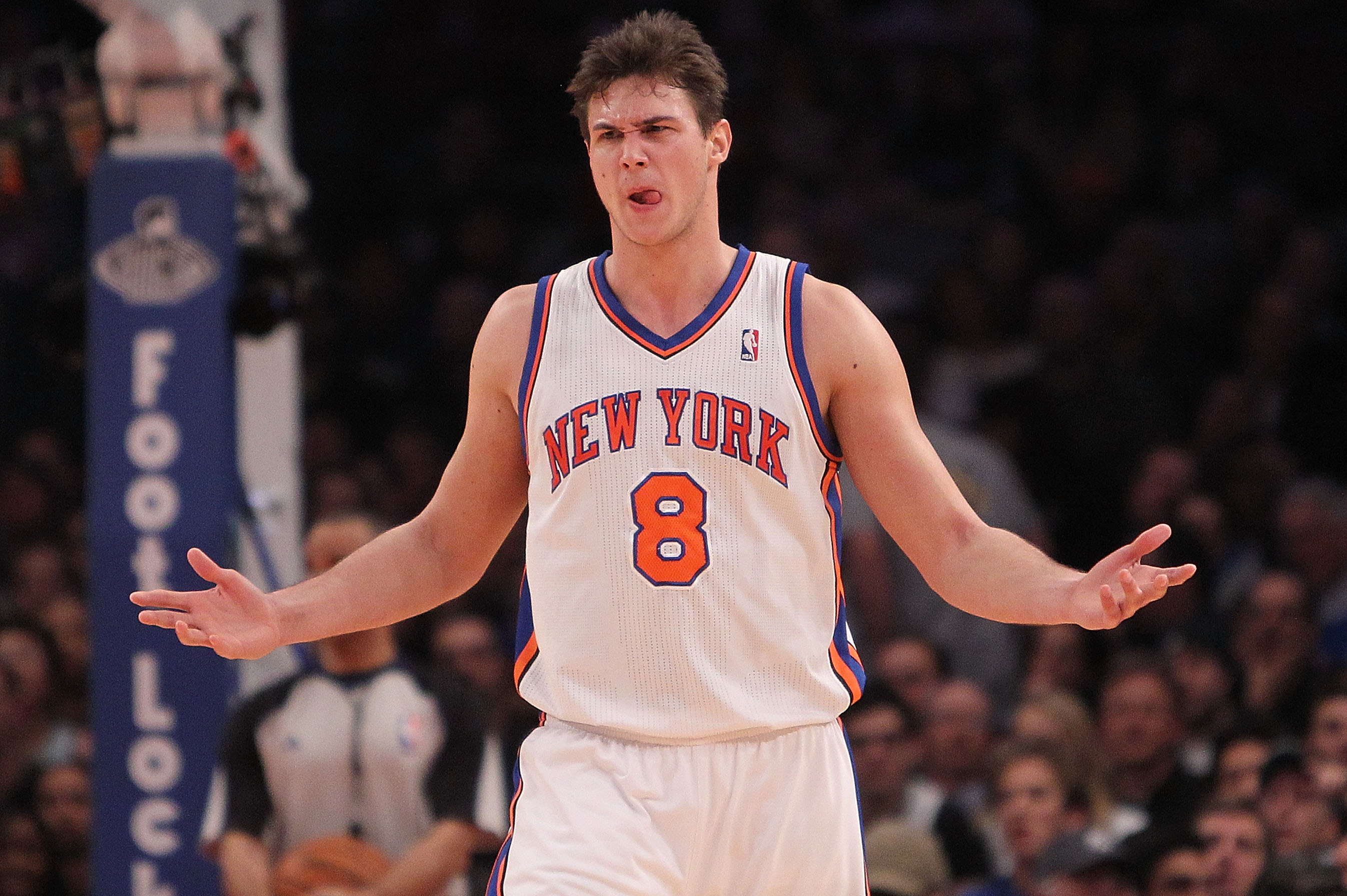 This one might be quite a short one, as there isn’t a lot to really say about the blighted career of Jordan Hill. An athletic power forward with terrific length, Hill looked a promising recruit out of Arizona. Hill was expected to go in the top 5, but when a skinny, slight looking shooter by the name of Stephen Curry was drafted at seven, the Knicks took Hill with the next pick.

Despite a promising looking Summer League, Hill just never got going in New York. He never started an NBA game, and in his 24 games off the bench averaged just 4 points and 2.5 boards per game. At the trade deadline, Hill was done, and shipped off to the Houston Rockets alongside Jared Jeffries in a three-team deal that involved the Sacremento Kings, whereby the Knicks acquired Tracy McGrady. Hill never really found much playing time until he found his way to the LA Lakers, and after two slow seasons, went on to start in 57 games in the 2014-15 season. He has not been in the league since the summer of 2017.

Verdict as a Knick: Miss
Verdict in the NBA in general: Miss
Who the Knicks could have had: DeMar DeRozan, Jrue Holiday, Jeff Teague 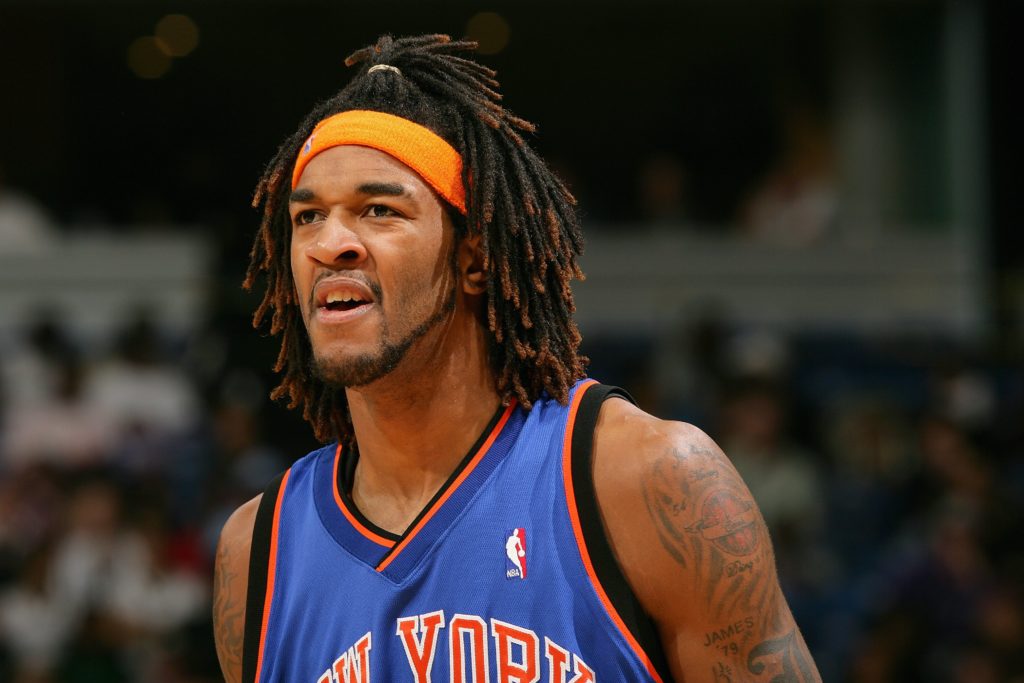 The Knicks forwent their 2010 first round pick as a result of the The Marbury Mega-Deal, whereby the Knicks sent McDyess, Charlie Ward, a pair of fringe prospects—Maciej Lampe and Milos Vujanic—and two first-rounders (2004 and 2010) to the Suns for Stephon Marbury, Anfernee Hardaway and Cezary Trybanski.

Who the Knicks could have had: Paul George, Gordon Hayward, Eric Bledsoe

Me, personally, I loved Shump. A gritty, hard-nosed shooter out of Georgia Tech, Shumpert impressed during his first season out of college, playing 59 games and averaging 9.5 pts per game, going on to being named in the All Rookie First Team 2012.

Interestingly enough, his season average during his rookie season has turned about to be his best to date in the league. Weird, huh? Proble has been for Shump is that since leaving NYC, he has never started more than 50% of the games in a regular season. He actually hadn’t found a regular starting role until this season when joined the Sacremento Kings… only to be traded again. Poor Shump. At least he’s got an NBA Championship ring after playing a prominent role off the bench in the Cleveland Cavaliers title win in 2017.

Verdict as a Knick: 50-50 – I liked him, but I don’t think he was ever going to carry a team to victory
Verdict in the NBA in general: 50-50 – Has bounced around teams but has lasted the test of time in the league
Who the Knicks could have had: Tobias Harris, Jimmy Butler, Isaiah Thomas 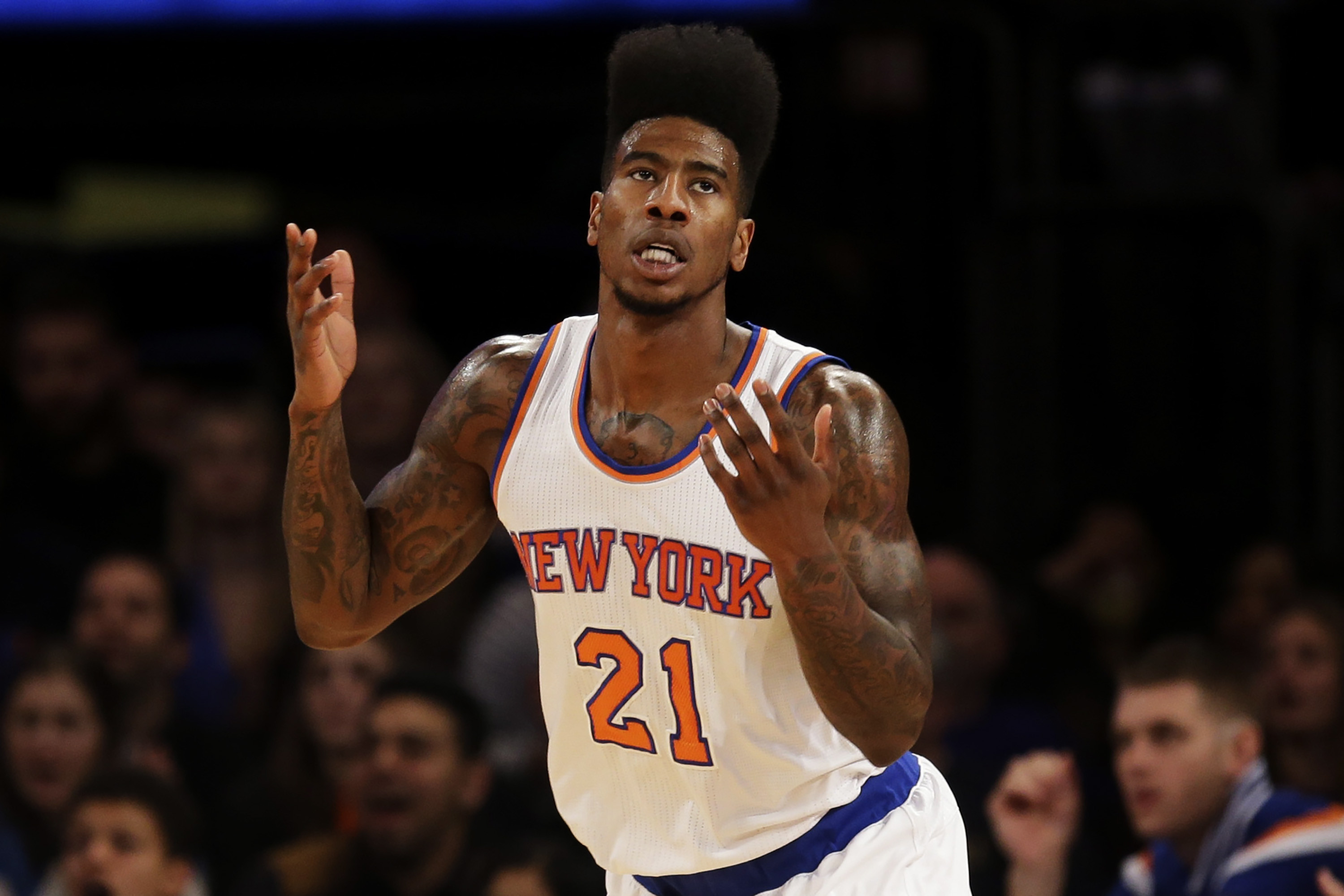 Who the Knicks could have had: Draymond Green, Khris Middleton, Evan Fournier

I will always have positive things to say about Tim Hardaway Jr, partly because he was so cool to me in 2015 when we met in London during the Knicks game on British shores against the Milwaukee Bucks.

Hardaway Jr never got the credit he deserved in New York, and is one of very few Knick draft picks to get better and better through every season of basketball. Hardaway averaged more than 10 points per game during his rookie season, and was named in the All Rookie First Team 2014, alongside one Trey Burke of the Utah Jazz. Giannis Antetokounmpo, who could only make the All Rookie Second Team. Hardaway Jr did leave New York for a brief stint in Atlanta before being traded back to the Big Apple, and up until the point of being traded to Dallas this past January, he was averaging 19.1 points per game. Outstanding

Verdict as a Knick: Hit
Verdict in the NBA in general: Hit – He still has some to prove, but is still a strong shooter who can get you points
Who the Knicks could have had: Rudy Gobert, Andre Robertson, Reggie Bullock 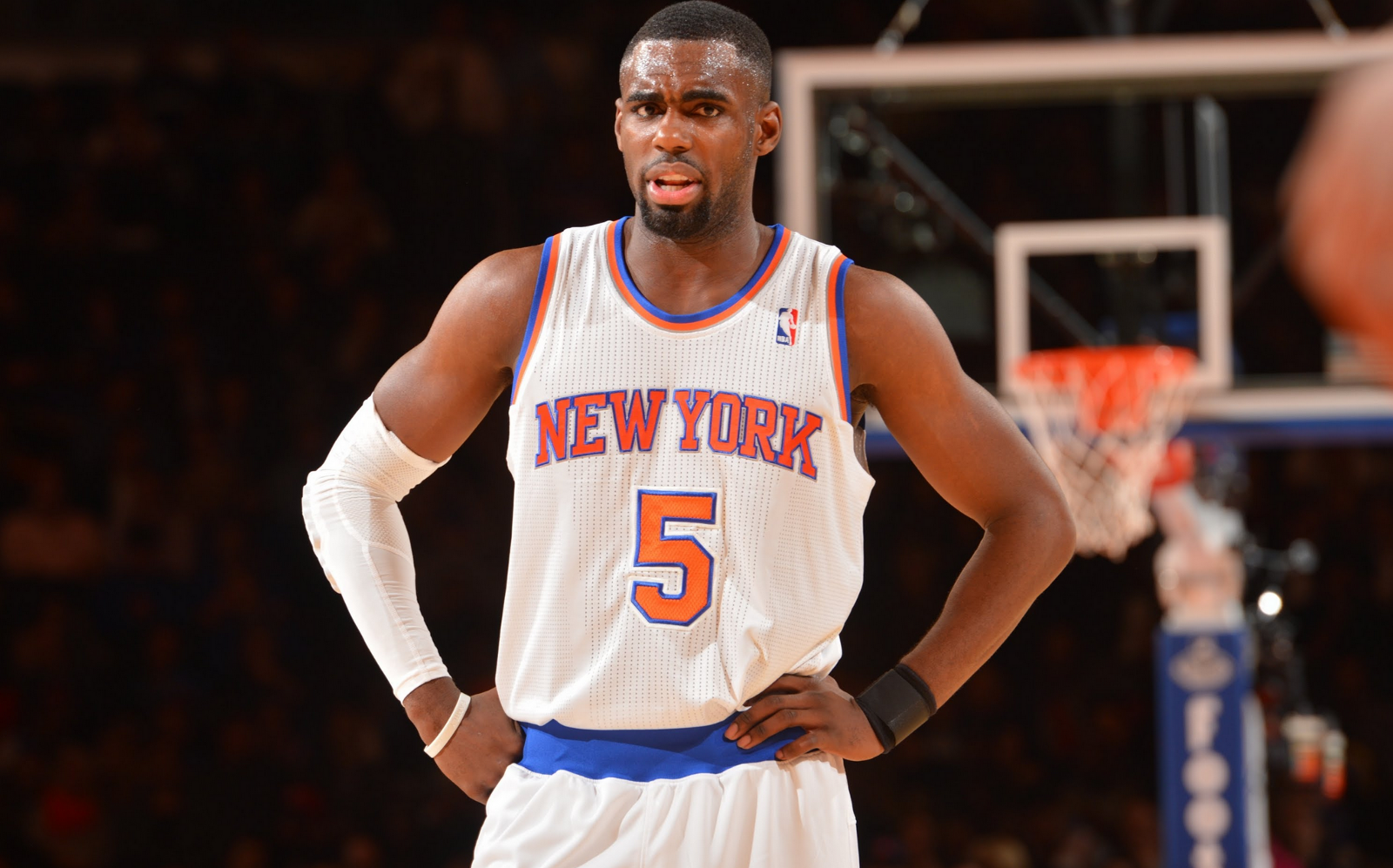 No pick again for the Knicks after the blockbuster trade for Carmelo with the Denver Nuggets.

Who the Knicks could have had: Zach Lavine, Nikola Jokic, Clint Capela

I could be bitter, or I could tell it how it is. Porzingis has easily been the best player the Knicks have drafted for over a decade, averaging 14.3 points and 7.3 boards per game in his rookie season, as well as being able to knock down the three at a comfortable rate. He waltzed into the All Rookie First Team, and quickly became the face of the New York Knicks franchise after the departure of Melo.

The Unicorn received praise all around the league, most notably from Kevin Durant who helped coin his nickname, and in 2018 he was named an All-Star, despite unfortunately pulling out of the game due to that horrible season-ending injury. Now with Dallas, whether we like it or not, he is still going to take them forward alongside fellow European talent Luke Doncic

Verdict as a Knick: Hit
Verdict in the NBA in general: Hit
Who the Knicks could have had: Devin Booker, Terry Rozier, Myles Turner 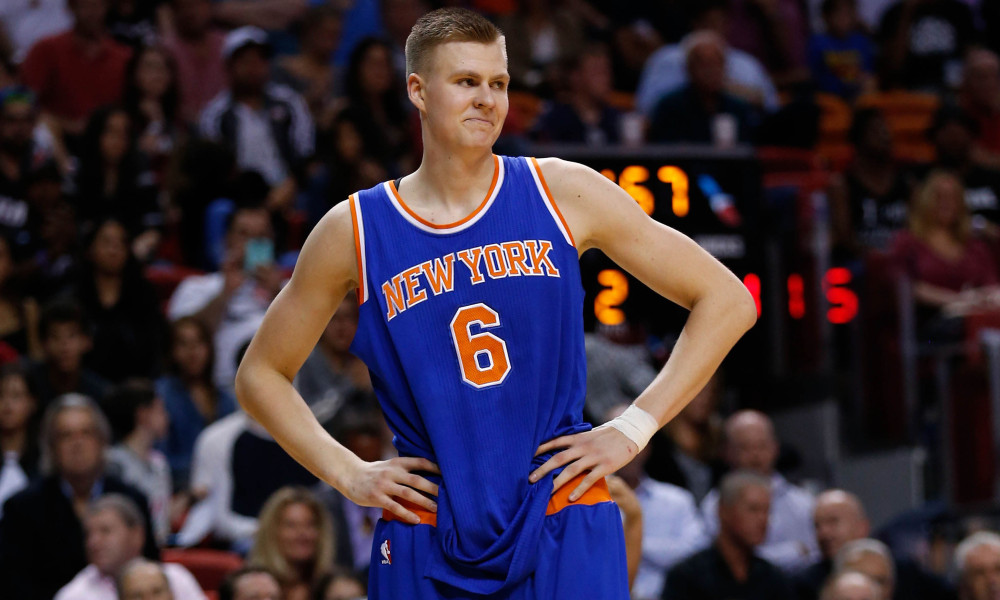 Once again, the Knicks had no first rounder due to the Melo to Denver trade.

Who the Knicks could have had: Jamal Murray, Pascal Siakam, Dejounte Murray

There is some sort of karma, if that is putting it correctly, to the fact that the Knicks had to choose between Frenchman Ntilikina or NC State freshman Dennis Smith Jr as for their new point guard. Now both are in the Big Apple, it begs the question, who is going to see more game time going forward.

Frank has been hailed for his elite defending, and I have to agree, he is lockdown on some of the most prolific NBA vets. However, Frank is still not scoring consistently, a problem that has been there since he first entered the NBA, scoring just 5.9 points per game, but he did only start nine games.

I’m still leaving the jury out on Frank, but many fans would have hoped his eighth pick would have merited a greater return in terms of points scored.

Verdict as a Knick: 50-50
Who the Knicks could have had: Donovan Mitchell, John Collins, Jarrett Allen. 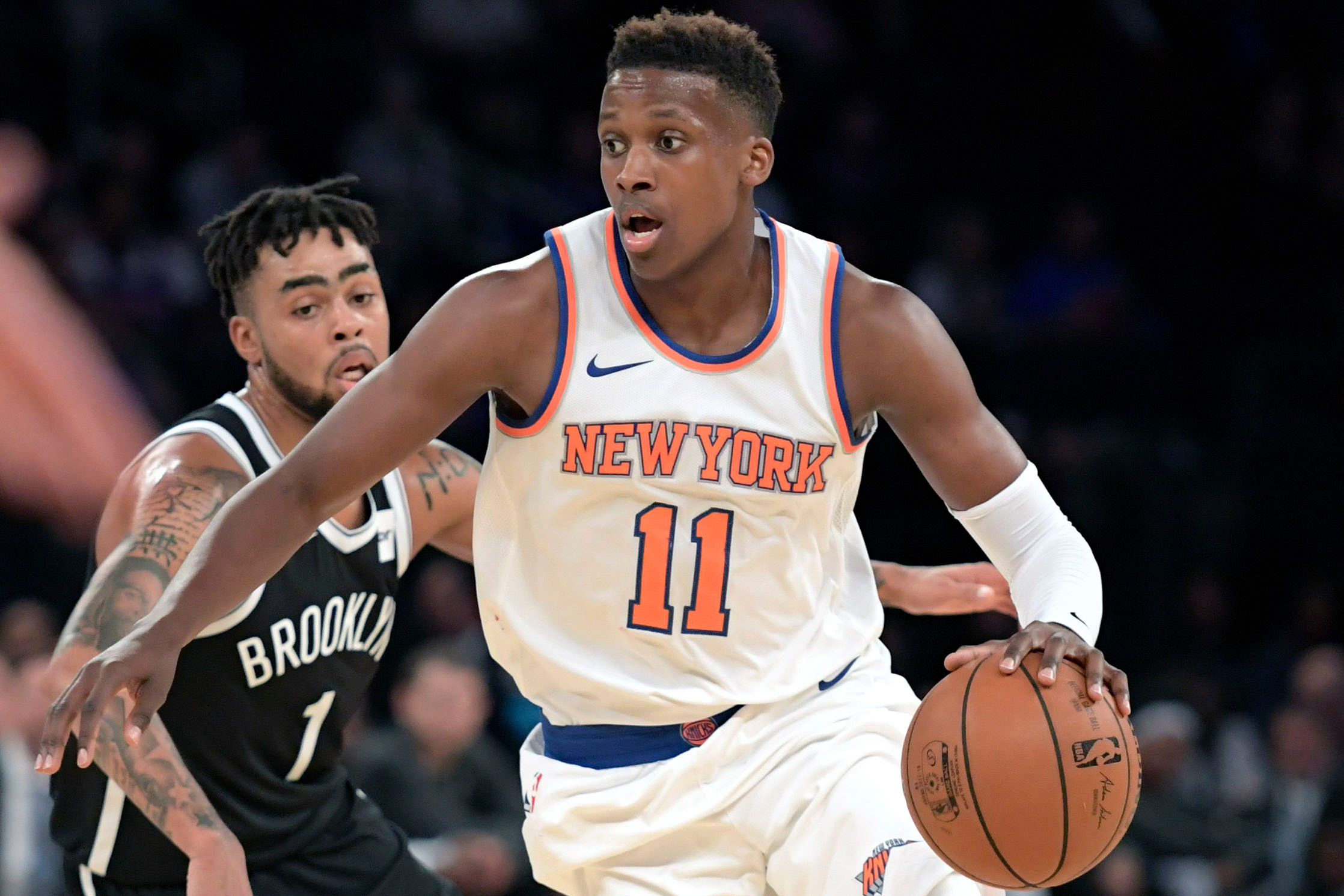