Tuesday, February 7th, 2023
THE LATEST
Home Knicks Five Players the Knicks Could Sign with Their Mid-Level Exception Option in 2019

For Knicks fans, landing Kevin Durant alongside a second star, a la Kyrie Irving, Kawhi Leonard, Klay Thompson or Jimmy Butler would be like celebrating Christmas Day in Disneyland this July, and anything less will be the end of the world as we know it.

It’s no secret that the Knicks have aligned themselves to offer two of the game’s biggest free agents the chance to join forces and run the show at MSG, alongside a plethora of raw but gutsy young guns such as Dennis Smith Jr, Kevin Knox and ‘Money Mitch’ Robinson. Throw Alonzo Trier, Damyean Dotson, Frank Ntilikina and Luke Kornet into the mix, and you’re well on your way to filling out the bulk of the roster. However, with Mario Hezonja unlikely to still be in NYC come July, the Knicks will have their MLE (Mid-Level Exception) budget at their disposal.

This year, the MLE comes in at around the $9 million mark. So what could the Knicks do with that? Let’s take a look below at five free agents Scott Perry and co could monitor this coming off-season, and I’ve given my odds out of ten on how likely the possibility is of it happening.

You want shooters? I’ll give you shooters. Danny Green, aka the other guy Toronto got in the Kawhi Leonard trade. I jest, of course, I’m certainly not going to knock Green’s progression in the league. The 46th overall pick in the 2009 draft, Green played all four years of his college career at North Carolina, before being picked up by Cleveland, who didn’t really want him, and cast him aside after one season. However, when the Godfather himself Gregg Popovich cast his eye over young Danny, he saw a baller in there. In the 2011-12 NBA season, Green played in 66 regular season games, and started 12 out of 14 play-off games for the Spurs. Better yet, he shot 48.6% from three (as per www.basketball-reference.com). Astonishing.

Green carved out a hell of a career for himself in San Antonio, becoming an NBA Champion as we all know in 2014. Now a valuable rotation piece in Toronto’s team, Green is going to turn 32 in the off-season, and may be looking at his final multi-year contract in the league. 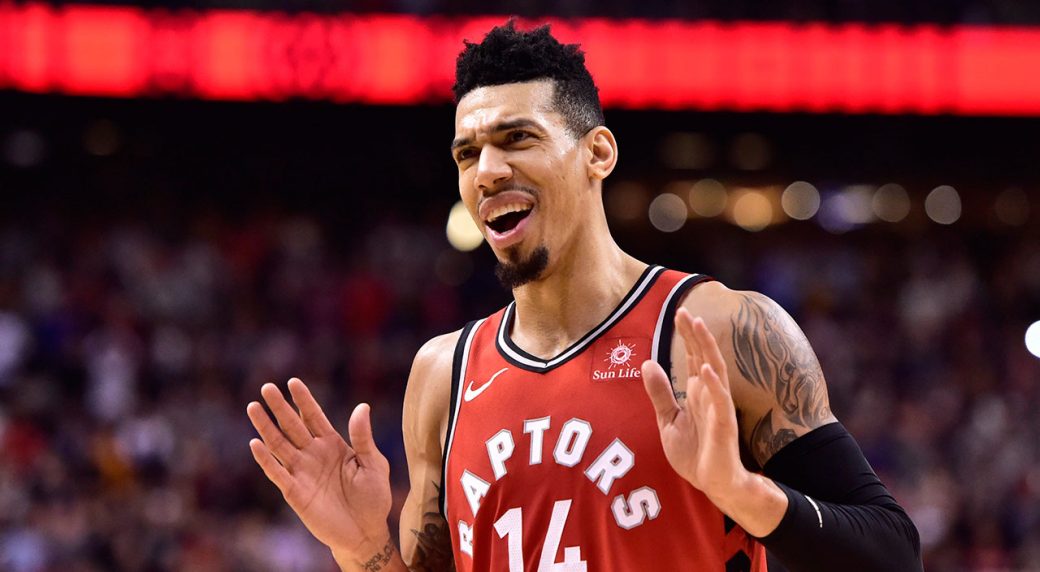 VERDICT: After all he’s been through, don’t you think Danny, born and raised on the south shore of Long Island in North Babylon, would want to return home to New York City and add some much needed experience to the this young Knicks team?

Want to add some real meat to the bones about this move? This could have happened four years ago. As per Ian Begley, Knicks correspondent for ESPN, he tweeted back in 2015 when Green was about to hit free agency then: #Knicks “want to be in” the mix for FA guard Danny Green, per league sources. Green’s interest in NYK is unclear at this point (@IanBegley twitter account).

Ladies and Gentleman of New York City, all the way from Brooklyn, New York, on Air Guitar, Lance ‘Will Make You Dance’ Stephenson! Okay, that’s enough of an intro. Is this so unlikely? Lance seems to me like a guy who likes a project, and if he’ll go play with Lebron, I’m pretty sure he’ll be happy to play with Kevin Durant. More importantly here, the Lakers have no bird rights with Lance, so they’d take a hard shot to the salary cap by resigning him.

Did you know that Lance was of serious interest in the 2010 draft to the Knicks, and he worked out with the team after the combine? From the New York Knicks Facebook account itself in 2010: “NBA Draft prospect Lance Stephenson arrived in NYC & spoke about the opportunity to wear a Knicks uniform & play at Madison Square Garden, where he led Lincoln (Brooklyn) High School to 4 PSAL titles.” The Knicks eventually decided to use their back-to-back second round picks on Landry Fields (who went All-NBA Rookie First team, before retiring at 27 due to injury) and Canadian Andy Rautins (who?), with the Lance going to the Indiana Pacers one pick later. Drat. 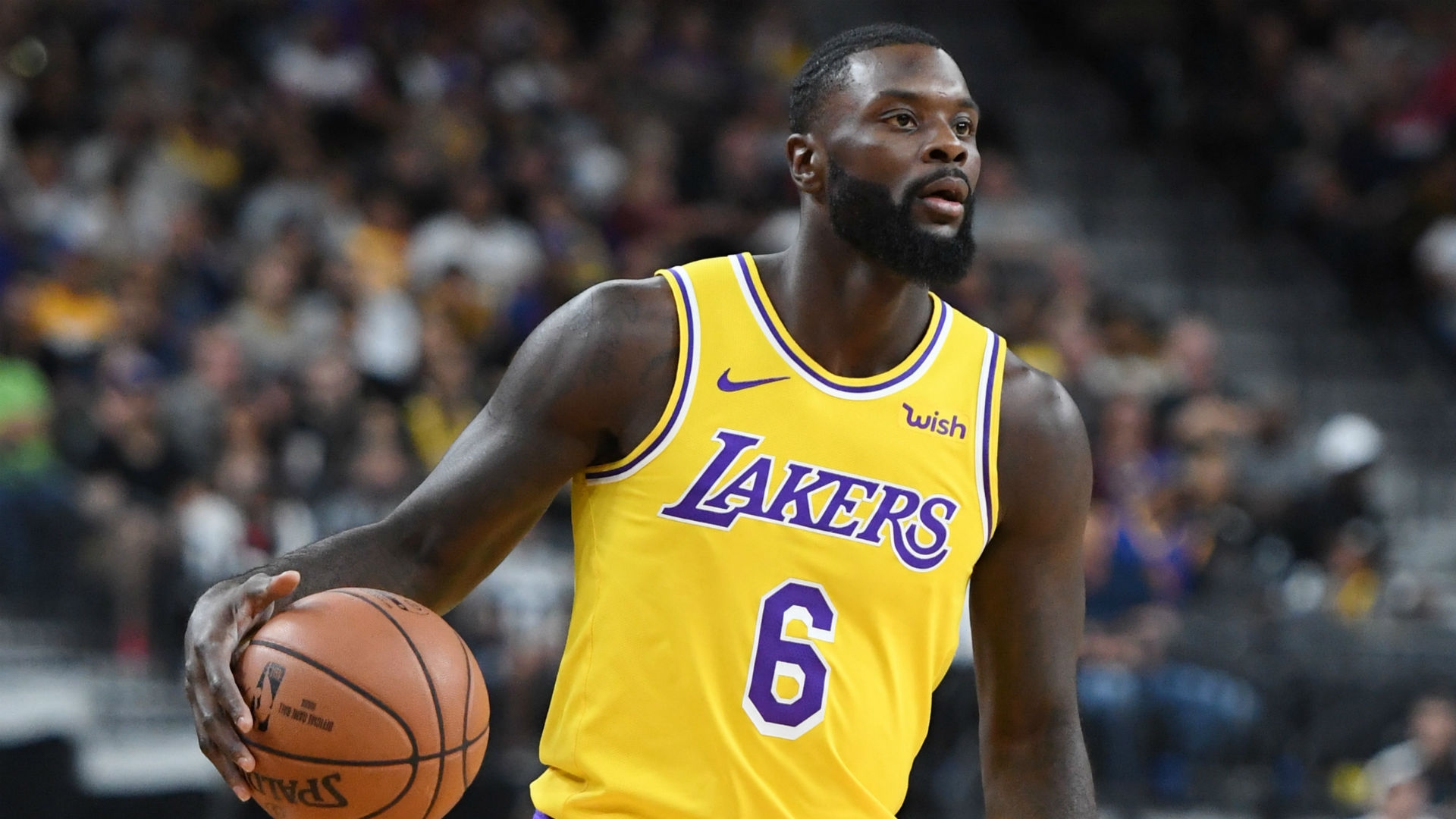 VERDICT: Is it finally time to see Lance in a Knicks uniform? Hmm, it’s a tricky one. He’d add that much needed steely grit and determination to a Knicks team that can sometimes look a bit weak and lacklustre, but will his wily sense of humour and extraverted personality fly with David Fizdale? Maybe not, but it’s not out of the question. I’ll say 5.5 out of 10.

It was a little over a year ago, right before the trade deadline last season when Marc Berman of the New York Post reported that Knicks GM Scott Perry was very, very interested in bringing Elfrid Payton to New York. Unfortunately for him, a deal couldn’t be done with the Orlando Magic, and we ended up with Emmanuel Mudiay instead. Payton didn’t actually last that long in Orlando there on after, being traded to the Phoenix Suns for the remainder of the season before ending up in his home state of Louisiana with the Pelicans.

However, lets not forget that Payton was drafted by none other than former Magic GM, yep, you guessed it, Scott Perry (via the 76ers). Perry is a great admirer of Payton, who was the 10th overall pick in the 2014 draft out of LU. Also, I’ll throw in that the Pelicans don’t have bird rights on Payton, so they too would have to cough up a lot more than the $3 million he’s being paid this season. Will we finally see Perry and Payton re-united at The Garden? 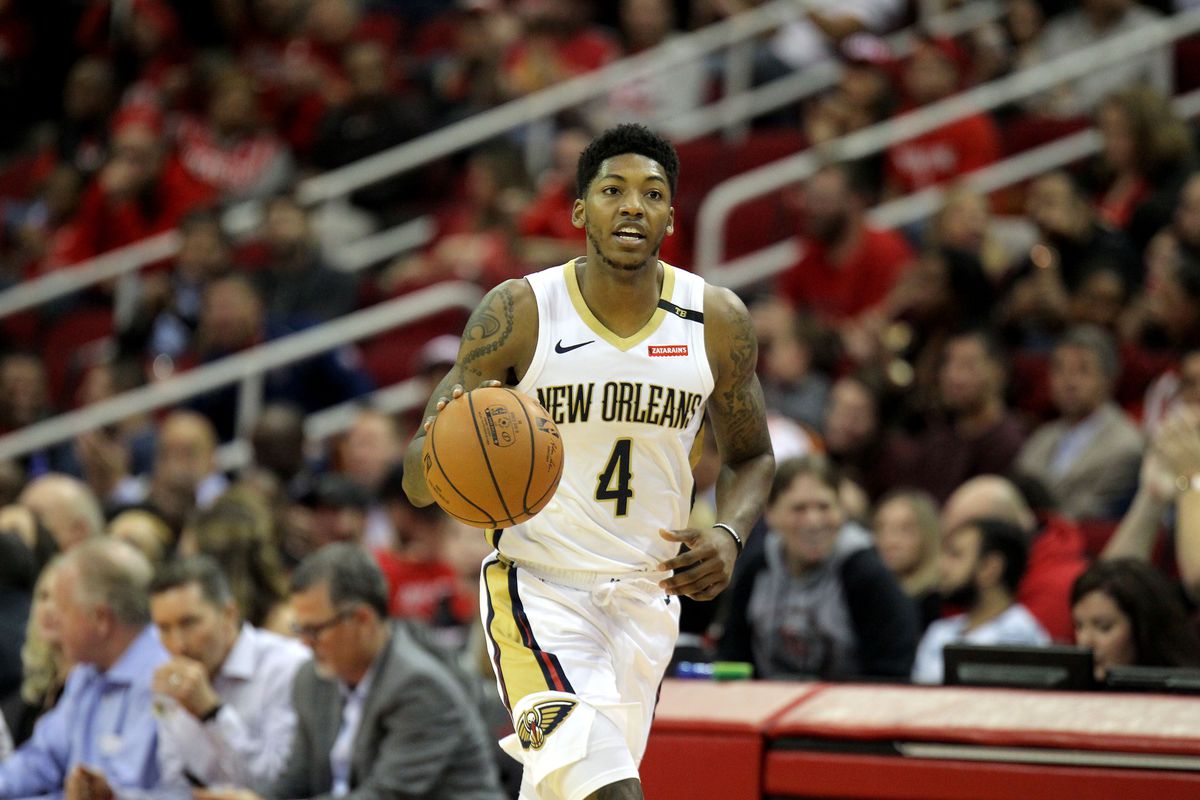 VERDICT: Meh, probably not, but there’s pieces there to make it viable? The Knicks are likely to keep the faith with Dennis Smith Jr and Frank Ntilikina, and I’m sure even Scott Perry is happy with that.

Even I’ll admit this is a bit pie in the sky, but why not throw Tyreke into the mix. Evans’ decision to sign a one-year deal with the Pacers definitely raised some eyebrows in the summer, adding another fine shooter to Indiana’s already loaded arsenal. However, his streaky shooting this year has maybe supported Nate McMillan’s decision to only give him a contract for the 2018-19 season.

Evans is a good player, there is no doubt about it, but the Pacers don’t have bird rights, and would either have to pay him close to ‘starters’ money, or try and convince him to sign at the top end of the MLE, which is where the Knicks would come in. The Knicks need shooters, that’s a fact. They are the second worst three point shooters in the NBA, with only Phoenix throwing up more bricks. 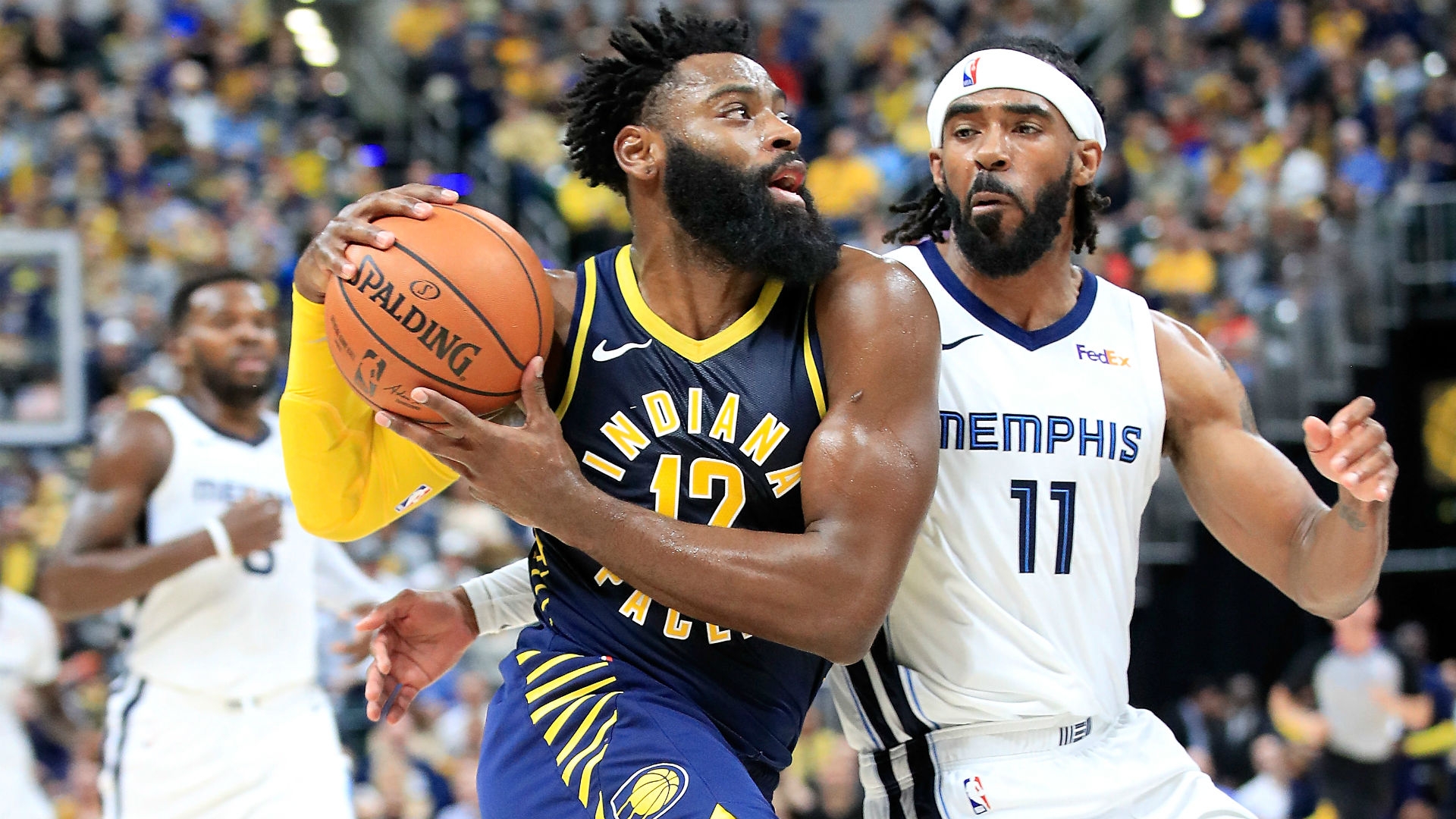 VERDICT: I’ll keep this one short and sweet. If it happens, it’s simply because the Knicks needed scorers from three, with Evans circling around just south of the 40% mark (as per www.basketball-reference.com), and not because there are any tangible links between the two. For that reason, it’s only a 3 out of 10.

My pièce de résistance. I have to admit, I never saw DeAndre Jordan, the 2017 All-Star in a New York Knicks jersey. Yet, here he is! When he first landed in New York a few weeks ago, I thought that this was just going to be a short term fling between the two. Now, I can see what could really be brewing in Perry’s melting pot.

I’m only going to briefly touch on it, as New York Sports Nation writer KFarhat6 explains so eloquently here that Jordan could be the perfect mentor of young Mitchell Robison, as well as play a big role in organising the Knicks defence. His experience is unrivalled, and with his career beginning to wind down despite the fact he’s not 31 until July, Jordan could be ready to settle down in the Big Apple.

He seems already impressed with the young talent around him, and let’s not forget to mention that he’s closed friends with none other than Mr. Kevin Durant. A lot of things are starting to add up, and I think I see the answer to this equation that has troubled us all season long. 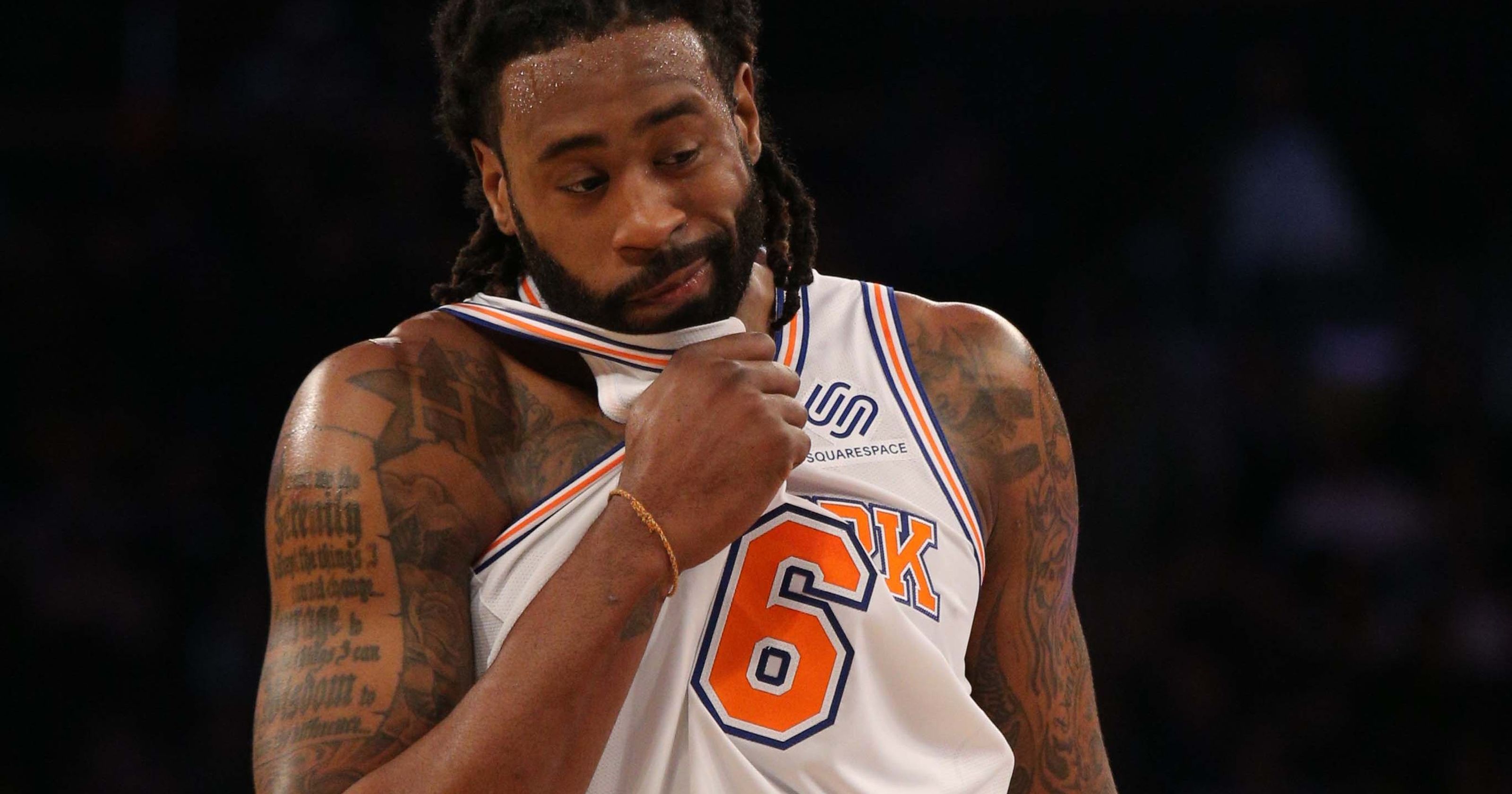 VERDICT: Right now, this surely seems the most tangible one. A lot of writers have touched on it, and the potential of Jordan accepting $9 million to be part of this huge chapter in the New York Knicks existence is surely more than a possibility.