Wednesday, November 30th, 2022
THE LATEST
Home Yankees The Yankees “Lukewarm Stove” Has Britton In, Robertson Out

The MLB Hot Stove is relatively cold so far. The Yankees biggest move up to this point was resigning J.A. Happ, and the Troy Tulowitzki certainly has made the most waves.

Nothing is as enticing as the Manny Machado Sweepstakes. However, in the absence of that landmark free agent acquisition, the Yankees have made some moves to bolster their bullpen.

The Yankees have agreed to sign closer Zach Britton to a $39 million contract over three years with a fourth year team option in 2021 and extend Britton while paying him an additional $14 million (Passan, ESPN).

For Britton to get that extension, he will have to pitch much better than he did last year in pinstripes.

Britton, who turned 31 in December, pitched to  2.88 ERA last year in 25 appearances for the Yankees with a 4.22 FIP. He also recorded three saves which shows he will get the opportunity in the ninth sometimes over flame-throwing Aroldis Chapman.

Britton certainly was not the pitcher the Yankees though they were acquiring at the trade deadline. Britton pithced to a .794 ERA from 2014-2016 including a .54 ERA in 2016. He also had a sub-1 WHIP over those seasons.

The Yankees would love that same production out of Britton, but any improvement from last season will suffice.

Britton admitted to his frustration several times last season while he was giving up runs and blowing leads late in games for the Yankees. Hopefully Yankees fans can chalk up those struggles to Britton’s adjustment to the Bronx. Although, it is not like Britton is unaccustomed to pitching in high leverage situations.

In the three year span when Britton was flourishing, the Orioles made the playoffs twice, once in ’14 and once in ’16. He can handle the pressure of a playoff push. The scruitiny of being closely observed by Bleacher Creatures and the rest of NYC may have been tough for Britton. Luckily, he has all off season to adjust and learn from other Yankees players. Aaron Judge never struggled with that pressure and Giancarlo Stanton may be able to help him overcome the scrutiny.

Stanton had a tough beginning to the season that came with a lot of criticism. Maybe Britton needs a supporting fan like this… 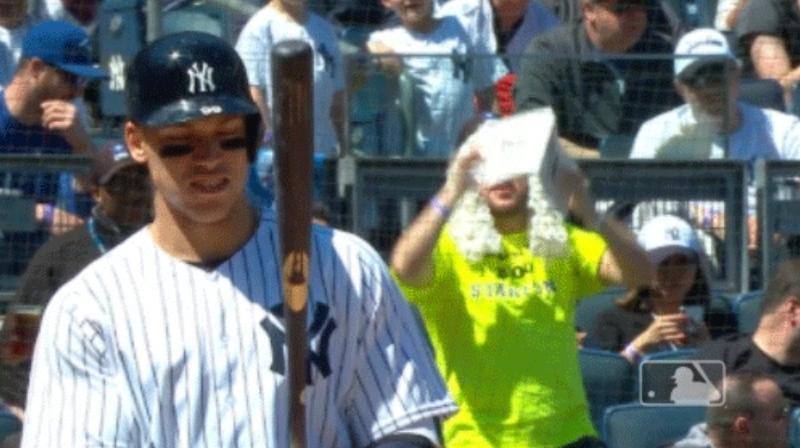 Britton also may have to adjust to pitching in the 8th or 9th inning instead of assuming the lead as the 9th inning closer. Yankees fans and manager Aaron Boone will have to wait and see.

Britton was one of the best relief arms on the market so the Yankees can be proud of landing him. Other notable arms are Craig Kimbrel and Sergio Romo.

The Britton signing came on the heels of relief pitcher David Robertson signing with the Phillies. Robertson was an integral part of the Yankees 2009 championship run and also helped the Yankees beat Cleveland in the 2017 ALDS.

David Robertson has now been on three teams that wear pinstripes at home. Maybe one day, Robertson will return to the Yankees for a third time to ed his career with the best pinstriped team.

One more thing about this MLB “lukewarm stove”…..

The members of the Barstool baseball podcast, “Staring 9,” had an interesting idea to make the off season more exciting. Jared Carrabis and Justin Havens were in favor of instituting a free agent deadline like in the NBA. This would prevent players from waiting until the middle of Spring Training to sign with teams and would make this whole experience in the winter fun for fans! And it would also make bloggers’ jobs easier too…….

Dallas Braden, who is the cohost of the show, was not in favor of that change.

I don’t know if that change will ever come, but I’d certainly welcome it.