Sunday, November 27th, 2022
THE LATEST
Home Yankees Troy Tulowitzki Changes EVERYTHING for the Yankees, but not how you think

The Yankees signed a shortstop! However, it is not the marquee name that most Yankees fans were hoping for. According to ESPN, the Yankees have signed the 34-year-old Tulowitzki to a league minimum deal.

Rumblings around the Yankee-universe have deemed this move as an end to the Machado sweepstakes. However, signing the injury prone Tulowitzki, who did not play a single game in 2018, is not indicative of anything besides a clever front office.

In 2017, Tulo played 66 games before heading to the 60-DL with an ankle injury he sustained against the Angels. Watch his gruesome injury here…

A combination of age, injury and salary prove the Yankees do not think they have found their guy to play short for 162 games. It would be insane to think Tulo can withstand that ware and tear day in and day out. Multiple sources and league insiders feel the Yankees are still pursuing Machado.

The #Yankees informed Manny Machado days ago that they were signing Shortstop Troy Tulowitzki to minimum contract as a no-risk move. Tulo has played only 66 games the last 2 seasons.

Troy Tulowitzki is expected to play shortstop for the Yankees while Didi Gregorius recovers from Tommy John surgery. Important: This does not take the Yankees out of the Manny Machado sweepstakes, sources tell ESPN. Tulowitzki at the minimum salary was simply too good to pass up.

Tulowitzki adds a veteran presence to the clubhouse in the Bronx and has an impressive statistical history.

I checked out FanGraphs.com to see if he has potential to send a ball over the short porch in right field at Yankee Stadium. These are his batting outcomes from 2012-2017. 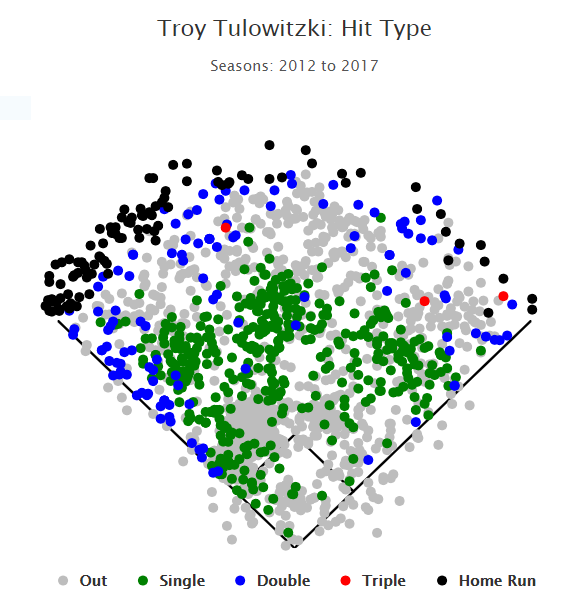 It looks like he could poke some over the 314 foot wall in right, but he is predominately a pull hitter when it comes to long balls.

Also, Tulo played ten years in Colorado so his stats may be skewed by the “Coors Field Effect.” I am not a fan of keeping players like Larry Walker out of Cooperstown because of thin air, but it is important to realize the effect Coors Field has had on Tulo’s career. Because of the high altitude, Colorado has been deemed a very hitter friendly park because the thin air allows baseballs to travel further. Here are his home-road splits in 2009 when he was 5th in MVP voting for Colorado:

Here are his home-road splits in 2016 when he played a full season in Toronto:

Defensively, Tulo has won 2 gold gloves at short. Also, according to ReviewingTheBrew.com, Tulo would be interested in playing second base. This means he can add a bit of platooning to the Yankee infield, especially if the Yankees do not resign FA Neil Walker, who played 1st, 2nd, 3rd, and OF last season.

Clearly, Troy Tulowitzki seriously improves the Yankees even if he does not put up the same numbers he did in Colorado. Odds are, with his age, injury history, and because the air isn’t as thin in NYC as it is in COL, the Yankees should not count on Tulo to be 5th in MVP voting anytime soon.

However, he does add veteran leadership, a strong bat, and good defense to the Yankees at a very team-friendly price.

He changes the Yankees for the better, but he does not change the Yankees’ aspirations, OR NEED for Manny Machado. Nothing about this move stops Machado from choosing New York.