Sunday, January 29th, 2023
THE LATEST
Home Devils Much Needed Win After Another Rough Week for the Devils

With another week under wraps for the 2018-2019 season, the Devils have finally closed a much-needed victory against the Las Vegas Golden Knights, breaking what was seeming to be the start of another cold streak.

The Devils now only have 2 wins in the last 10 games, leaving them with an overall record of 11-13-6. After beating the Kings last Thursday night and finally breaking a tedious 9-game losing streak, the Devils started losing again, and badly. NJ went from scoring 3 goals in their own net, in a bizarre game against Anaheim on Sunday night, which ultimately led to a shootout overtime loss, to being completely dominated offensively by the San Jose Sharks in a back-to-back road game on Monday. 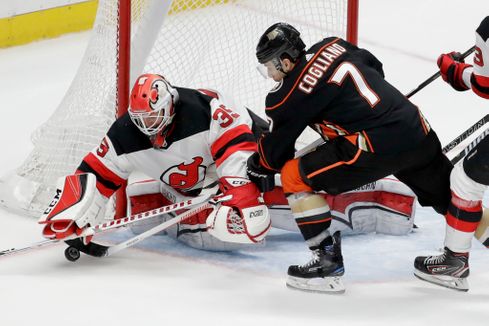 Last night’s matchup against the Las Vegas Golden Knights was almost too close to be comfortable for the New Jersey Devils. Vegas led the game by 4 goals for better half of the game. Schneider was pulled about 10 minutes into the first period after three goals were let up and Kinkaid took over, who let only one get past him in the second period. Luckily for Kinkaid, the Devils started creating more offensive opportunities and pressured the puck more aggressively in the opposing zone by the close of the second period, bringing the score deficit within 2. Down by 2 goals in the third period, the Devils were able to get two more past Fleury for the tie, to lead the game into 3-on-3 overtime. The game was brought to an outstanding close, with a beauty of a goal by Nico Hischier, following an excellent feed from Marcus Johansson for the New Jersey Devils overtime win. 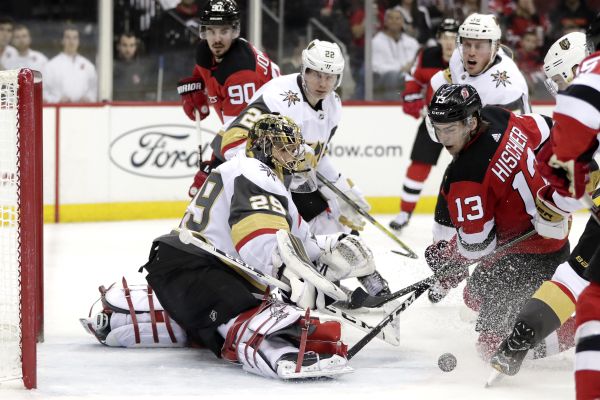 The Devils were looking upon Cory Schneider to lead the team again in goaltending, but last night’s performance was less than ideal for the starting goaltender. Schneider has yet to secure a home victory in New Jersey this season. The team’s leading point scorer, Taylor Hall, was also out due to an unspecified lower body injury and is questionable to return for tonight’s matchup against the Predators.

New Jersey is going to be facing off against some tough competition in the coming days, with the Western Conference leading Nashville Predators tonight, followed by the Toronto Maple Leafs on Tuesday and Columbus Blue Jackets on Thursday, all of which are positioned as likely playoff contenders. As of now, the Devils are still in last place of the Metropolitan Division, and arguably one of the worst teams in the league, statistically. Last night’s victory against the Las Vegas Golden Knights was a step in the right direction, but New Jersey still has a steep mountain to climb if they want to secure a repeat playoff appearance.