Football season is officially in full swing, and like most guys, you’ve probably had to send off some of your hard-earned cash to the local bookie. Betting on sports is the ultimate love-hate relationship. Hot streaks may cancel out a few weeks of losses, but ultimately you find yourself in the red, wishing there was a permanent fix.

Wouldn’t it be nice to check scores and come away with a smile on your face? While we can’t guarantee you’ll always be grinning ear-to-ear, we do know a great cutting-edge betting service that can help keep you out of the red for good.

The Linebacker is one of the best options out there, but before I tell you all about their features, I’ll let their numbers speak for themselves. Through Week 12 of the NFL season, the Linebacker has posted a 57.1% ATS (against the spread) record and a 58.9% success rate on Over/Unders. $100 average bettors have already made north of $1,450 using the Linebacker’s personalized predictions, with just one losing week all season. Sounds pretty ideal, right? It gets even better though, as you can try out the product and get 50% off your first month by using our special promo code ‘NYC’.

Outside of the steady profits, the best feature about The Linebacker is how easy it is to use. Subscribers have to input their preferred sportsbook and average bet amount, and The Linebacker takes care of the rest. Let’s take a look at their prediction from the Giants @ Eagles game in Week 12 to see just how easy and understandable their website is. 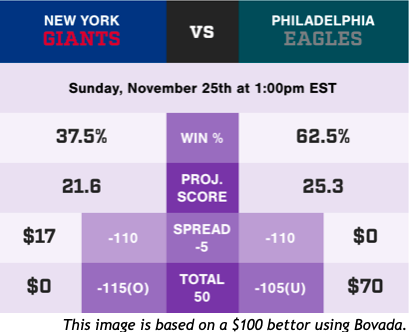 Each game is presented in this same format, with the home team listed on the right side and corresponding numbers below each team. In this case, Linebacker predicted the Giants would cover as 5-point underdogs against the Eagles on the road, and it played out to near perfection. Philly ended up winning by a score of 25-22, causing both bets to win and leaving The Linebacker subscribers smiling at the end of this one. Our score prediction was about as good as it can get, coming within 0.4 points on each team’s projected total. This isn’t the only time we’ve been spot on, however. Check out our projections for the Jets vs. Browns game in Week 3 that resulted in Cleveland’s first win since 2016. 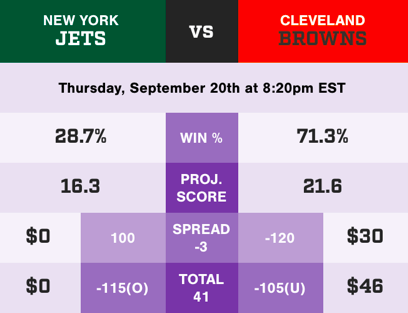 Cleveland came out on top by a score of 21-17, almost matching up perfectly with our prediction and allowing bettors to cash in on both plays. You might be asking; How could The Linebacker be this accurate? It’s thanks to our advanced models that simulate each game thousands of times, using the most up-to-date injury information alongside our team and player stats to project the most likely outcome. Plus, since you’re reading about it on nycsportsnation, The Linebacker is offering 50% off your first month subscription using special code ‘NYC’.

While sports will never be 100% predictable (which is also why we love it), Linebacker has certainly gained an edge on the field and turned consistent profits all season. Not only have our NFL picks had success, but $100 average bettors have also profited $4,320 using our NCAAF betting recommendations. Don’t miss out on this special opportunity to cash in on the remaining football season. Head over to TheLinebacker.com to sign up and start your free trial alongside this limited time 50% discount. Just use promo code ‘NYC’ when signing up.