Giants Twitter is filled with the Giants must draft Justin Herbert, and I don’t blame you. The guy looks legit and we have all come to the realization that Eli just doesn’t have it anymore. A lot of us believed this team could make a run at it this year including myself. We drafted Saquon instead of a QB and I love that pick because he is a monster and will continue to be. We spent some money on the offensive line and nobody expected it to great, but we all expected it to improve. It didn’t. You can have all the talent in the world, but the Line really defines what makes a good team. They make average QB’s look good and good tailbacks look great. Here’s the thing though. The offensive line play is not good across the entire league. That comes from 4.4 rush ends, limited practices, and the 20 hour rule in college. It’s truly the only position in the NFL that improves exponentially during the season. Let me get to my point though.

The Giants will surely have a top draft pick in 2019. There isn’t many teams that are looking for a QB. You could say the Redskins, Saints, Dolphins, Patriots, Chargers, and Broncos are the other teams looking to draft a QB. The Giants are in the top position out of all those teams currently for the 2019 Draft. The Giants should trade that pick away. They should draft the best Left Tackle with the pick they trade for.

Secondly, is Justin Herbert going to be a great QB? I don’t know. He plays in an Oregon spread system which a lot of these guys do, and I just don’t know how he will be in the NFL. 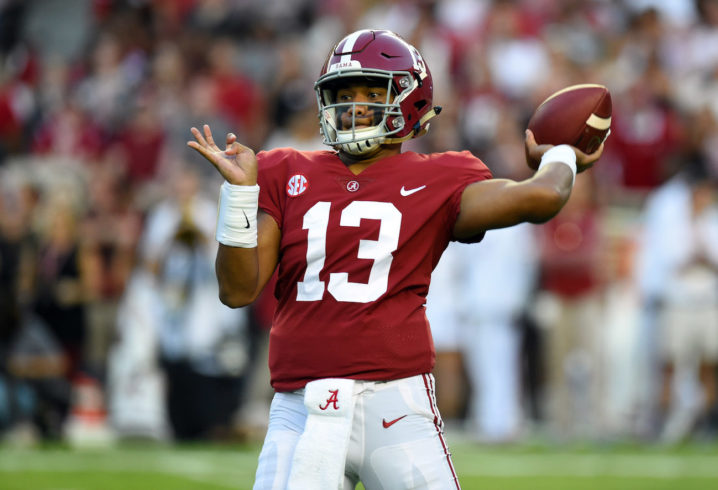 Tua though. I don’t know how to spell this guys last name, but I have never wanted to see a college kid play in the NFL so badly. We were introduced to him in the National freaking championship. The Crimson Tide we’re down 13-0 against Georgia and Nick Saban turns to a guy who hadn’t played a meaningful down all season and was a true freshmen who played in Hawaii in high school. Is that not the dumbest decision you’ve ever seen? Well it worked and Tua is legit.

Tua has started his first seven games of his sophomore year by throwing 21 touchdowns, 0 interceptions, completing 72% of his passes, and is averaging 20 yards per completion. He’s throwing for over 70% with 20 yards every time that happens. That is unreal. The guy can make plays with his feet as well, and seems like a no nonsense guy who will always work harder than everyone else. He has to be full of confidence because he enrolled in Alabama where Jalen Hurt was entering his 2nd season coming off of a last second loss to Clemson for the championship. The only thing you could say is that he’s only 6’1” but I think height is not as big of a deal for GM’s anymore.

How could the Giants pull this off though? Well they would have an extra first round pick if they made a 2019 draft trade. So if they weren’t in position to get him, sell the farm for the guy. I understand that this is extremely hypothetical, but I honestly think Tua will be a sure hall of famer when everything is finished. Imagine him with Saquon. Seriously. Close your eyes and imagine it.

Would you want the Giants to suffer through 2019 if it meant getting an all time great. I would. Let’s make the Giants a dynasty.