Wednesday, November 30th, 2022
THE LATEST
Home Nets A Farewell to Richard Jefferson and Why the Nets Should Retire #24

Richard Jefferson has called it a career after 17 seasons in the NBA and 1 NBA Finals Championship. I’m here to chronicle that wild and amazing career.

Richard Jefferson started his collegiate career at the University of Arizona after a high school career where he was named a McDonald’s All-America which is as high of an honor there is in high school ball. He committed to Arizona after a visit where he was joined by Luke Walton who also committed to Arizona which led to his own NBA career and is now the head coach of the Lakers. Richard Jefferson had no tattoos before he visited the University of Arizona but things change quickly when you’re being hosted by Mike Bibby. Mike brought Richard Jefferson to a tattoo parlor and Richard then got his infamous “RJ” tattoo. 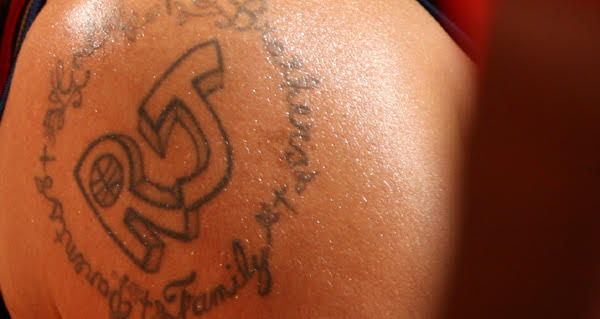 Anyways, Richard started his freshman year at Arizona in 1999 and would play there through his junior season. In RJ’s junior season he averaged 11 points and 6 boards a game along with future NBA All-Star Gilbert Arenas as well as Luke Walton and the team went all the way to the national championship game where they lost to Duke who was led by Chris Duhon, Shane Battier, and Carlos Boozer. Richard Jefferson had 19 points and 8 boards in that game and declared for the NBA draft shortly after.

The Houston Rockets drafted Richard Jefferson 13th overall but traded him, Jason Collins, and Brandon Armstrong to the New Jersey Nets for the 7th overall pick, Eddie Griffin. Take a guess who won that trade?

The Nets were coming off of a 26 win season an had long been the laughing stock of the NBA. The Nets drafted Kenyon Martin first overall the previous season and traded star player Stephon Marbury for current hall of famer Jason Kidd. What happened next is something all Nets fans will never forget. Jason Kidd sparked life into the team making players like Kerry Kittles and Keith Van Horn blossom while Kenyon Martin grew into a star and Richard Jefferson made the 2nd team all rookie squad and the Nets doubled their wins and blazed through the eastern conference playoffs to match up with the Shaq and Kobe Lakers. The unexpected dream season ended and Richard Jefferson’s rookie year ended in being swept by the Lakers who had won their 3rd straight Finals.

During the offseason, the Nets traded Keith Van Horn to the Allen Iverson led 76ers for a 36-year-old Dikembe Mutombo. Richard Jefferson’s rookie year made it easy for the Nets to trade away Keith Van Horn and RJ jumped into the starting role as a perfect fit between Kidd, Kittles, and Martin. The team flourished and once again dominated the eastern conference and advanced to play the Spurs in the first ever finals matchup of ABA teams after sweeping the Celtics and Pistons to win the Conference Finals.

In the NBA Finals, the Nets and Spurs went back and forth in the first 5 games as the Spurs led the series 3-2 heading back to San Antonio. Game 6 was something I’ll never forget. The Nets dominated the Spurs in game 6 for 3 quarters in which they never gave up the lead and led by double digits for the majority of it. Then the 4th quarter happened. The Nets were up by 9 points with less than 9 minutes left in the game and looked poised to force a game 7 and possible chance at giving the Nets their first championship and letting New Jersey celebrate their second championship in a week as the Devils had won the Stanley Cup less than a week prior! The Spurs proceeded to go on a 19-0 run which put away the Nets and gave the Spurs their 2nd championship. Talk about a wild year for a Giants, Nets, Devils and Yankees fan. I was in 6th grade and had only been truly into sports for about 2 years and my Nets went to back to back Finals, my Devils won the Cup, and the Yankees beat the Red Sox on Aaron Boone’s famous game 7 homer which would lead to a World Series loss to the Florida Marlins. 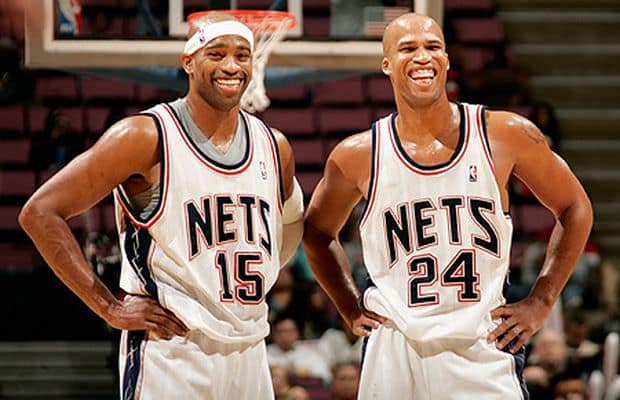 Richard Jefferson had proven to be a very good player in the NBA and the Nets were poised to make another run at it after a wild free agency battle with the Spurs for Jason Kidd (I honestly thought he was leaving). RJ, Kenyon Martin and Jason Collins were all a year older and Jason Kidd was at the prime of his career and the East was regarded as very weak with the Celtics and Pistons being the only competitors to the Nets.

The Nets ended the 03-04 regular season as the number 2 seed and had a matchup with the eventual NBA Champs Detroit Pistons. The series went 7 games including a 3-OT game in game 5 where Richard Jefferson had  31 points including 18 in overtime as well as a key block and assist to Brian Scalibrine where the Nets took a 3-2 series lead. The Pistons took the final two games and the Nets reign in the east ended.

The offseason was a wild one. Richard Jefferson played on the USA Olympic team which many star players decided to not partake in and resulted in USA taking home the bronze and not getting the gold for the first time since 1988. Kenyon Martin left for the Nuggets in free agency and the Nets struggled to start the season and fired head coach Byron Scott mid season to bring in Lawrence Frank who started his career 13-0 and put the Nets back in playoff contention. The Nets also traded for Vince Carter to play next to Richard Jefferson and Jason Kidd. Richard Jefferson continued to put up good numbers on a Nets team that could never get back to the Finals but was always in the playoffs. The Nets traded Kidd in ‘08 to the Mavericks and although Vince Carter was the best player, Richard Jefferson took over the leadership role on the Nets as a 20+ ppg scorer. 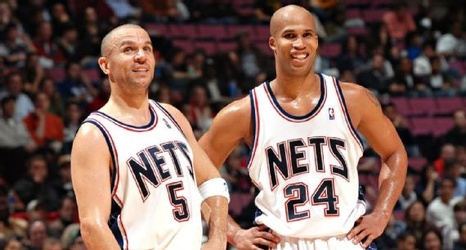 Then in the offseason of 2008, the Nets traded Richard to the Milwaukee Bucks. Richard Jefferson played through the entirety of the most successful Nets run in franchise history in which the Nets went to 2 Finals, 4 division championships and never missed the playoffs. The final piece of the Finals teams was gone. As a kid, I was heartbroken. As an adult looking back, I miss my childhood. Richard Jefferson said he was heart broken and had planned on being a life long Net. RJ left the Nets 2nd all time in Nets scoring history and still stands at 4th on that list today.

Richard spent the next 7 years chasing a championship for the Bucks, Spurs, Warriors, Jazz, and Mavericks but the NBA Champion title continued to elude him and he was known as a role player and “that guy from the Nets.”

In 2015, Richard Jefferson signed with the Cavaliers who were entering the 2nd year of Lebron being back in Cleveland and coming off a 4-2 NBA Finals loss to his former team, the Warriors. Richard Jefferson was a role player for the Cavs, but emerged as a key player in the NBA Finals.

I felt like a kid again and started rooting for the Cavs like a child. See those New Jersey Nets will always be my most beloved team. I’m a Jersey kid. Do I love the Giants and Yankees? Of course but those teams have the New York title. Do I love the New Jersey Devils? Yes but hockey doesn’t compare to basketball for me. I root for the guys from that team like no other. Jason Kidd getting the title in 2011 made me smile like a little kid. The following year the Nets left New Jersey and moved to Brooklyn. It ripped my heart out and I’ll always refer to them as The New Jersey Nets. I remember in 2004, Richard Jefferson telling in an interview that he didn’t want to leave New Jersey. I remember Richard was being interviewed sitting next to the Hudson River saying “we don’t wanna go there. We’re here and we wanna stay here” as he looked across the river. I can’t find this interview and if I ever see it, I might cry but let’s get back to the 2016 Finals.

Richard played extremely well in the absence of Kevin Love in game 3 and was even called on to start in game 4 with a healthy Kevin Love. Richard was doing what he had always done as an NBA player. Everything. He was a force on defense, the offensive movement and even threw down a dunk at 36 years old. The Cavs completed the greatest comeback in NBA Finals history and we all know how it happened.

Richard Jefferson was an NBA Champ. What he had came close to in New Jersey, chased in San Antonio and Golden State, and looked impossible in Cleveland… had finally happened. It was an emotional night for me as a sports fan. We had the best game 7 I’ve ever seen and my New Jersey Net had won.

Richard Jefferson continued on the Cavs the following year and was a key leader on a team that lost the 2017 Finals.

Richard was traded to the Hawks and waived and played his final season as a Denver Nugget where his young running mate Kenyon Martin abandoned him for 13 years earlier. RJ only played in 20 games and averaged less than 2 points, but did what he was asked.

So what is Richard Jefferson’s legacy? The ultimate teammate. A guy who did everything on the court. A guy who never complained. A guy who followed vets and led younger guys. A guy who averaged over 20 ppg when needed. A guy who stepped into a starting role for an All-Star at 36 years old and forced his coach to keep him there on the biggest stage. A guy who wanted to stay in New Jersey for his entire career. New Jersey. A guy whose number 24 should be retired by the Nets.